1824 The Spanish are Finally Defeated in America

By the end of 1824, Bolívar’s army had invaded the last Royalist stronghold in the Americas in the Viceroyalty of Peru. There were two key battles as part of this final assault. The first one was in Junín and the second one was in Ayacucho. In fact the Ayacucho forces were not commanded by Bolívar but by Sucre. The battle ended quickly when the independence forces captured Viceroy La Serna himself. After the Battle of Ayacucho a few Spanish commanders sought to hold onto Upper Peru, but within a few weeks they left and it was not long before Spanish soldiers would withdraw from América.

In the podcast above, Charles Walker, the keynote speaker at one of our events in Peru, discusses the independence of Peru. Walker considers the fact that independence in Peru came later than most of the other regions in Latin America. He speaks about different phases in the independence process, from the early campaigns of Tupac Amaru to the Battle of Ayacucho. In fact, many of the locals in the regions supported the Spaniards and more research is required on the reasons why different factions of people supported the royalist cause.

The island of Chiloé in the South of Chile was actually one of the last Royalist bastions to fall into the hands of the revolutionaries (in 1826). Chiloé had given the Spanish administration a lot of support. It not been part of the Patria Vieja, which was the old republic in the central region of Chile, but men from Chiloé were enlisted as soldiers by the Royalists and sent to fight there.

Thomas Cochrane and William Miller, British officers who were helping the revolutionaries, tried to take the island, but failed. Later Jorge Beauchef, a French military officer, led an attempt but again this failed. 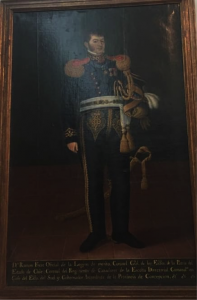 Finally on 15 January 1826 an offence led by the Chilean military officer Ramon Freire was successful and he was able to get the Royalist forces to surrender. 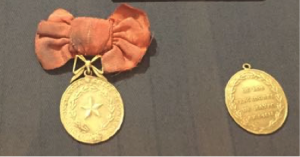 Gold medals from the 1818 Battle of Maipu. Unknown providence.

Freire took over as Supreme Director, in 1823 when Bernardo O’Higgins was replaced by the Junta. In 1827 Freire became president and used his position to advocate for the abolition of slavery, freedom of the press and educational reform.