1817 San Martin Crosses the Andes from Mendoza to Chile

Although the initial waves of independence movements had been quashed by the Spanish forces, a resurgence began in 1817 and was more successful. San Martín began this resurgence by crossing the Andes from the revolutionary stronghold of Río de la Plata, to Chile. Bernardo O’ Higgins worked with San Martín to strengthen the assault. This phase of the wars of independence is particularly interesting since it required forces from both sides of the Andes to work together. In his book, Armies, Politics and Revolution. Chile, 1808-1826, Juan Luis Ossa Santa Cruz examines the Army of the Andes considering in particular the way the men from Chile and from the Río de la Plata region worked together between 1814 and 1817. There was some friction between the different factions but José de San Martín was able to overcome these rifts to bring his military strategy to fruition. 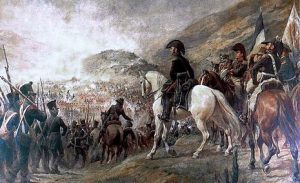 The Battle of Chacabuco

Martín’s military strategy led the soldiers over difficult terrain; the army crossed the Andes Mountains at various points to confuse the Spanish Royalist forces. This had been meticulously planned with supplies stored in places in advance. The independence fighters gained victory in the Battle of Chacabuco on 15 February 1817 and subsequently entered and took control of Santiago. There is a short description of the Battle of Chacabuco in the podcast above by Natalia Sobrevilla.

A more detailed analysis of the strategy of the Andean assault is given in the documentary below. It was made by the Argentine television channel Canal Encuentro and features the War and Nation researchers Juan Luis Ossa Santa Cruz and Alejandro Rabinovich. Alejandro Rabinovich has also written extensively about the plight of the troops from the Río de la Plata region in his book Ser soldado en las Guerras de Independencia. La experiencia cotidiana de la tropa en el Río de la Plata, 1810 – 1824.

While the Andean mission was successful, the Royalist Forces still had control of the South of Chile and fighting would continue with them for many years, however San Martín now had his eyes set on the more powerful region of Peru and his next major step would be to set sail for Lima.

In the podcast below, Alejandro Rabinovich tells a tale about a black soldier from San Martín’s army.

One of the most famous mulatto soldiers in San Martín’s army was José Romero. Romero was the son of a white aristocrat and a black servant. His aristocratic father had ensured that the boy received a good education but he did not officially recognise the boy as his son or pass on his name to him, as was customary in those times. Nonetheless with his father’s support, Romero would go on to be a soldier. He joined the army at the age of 13 in a regiment that was specifically for mulattos. 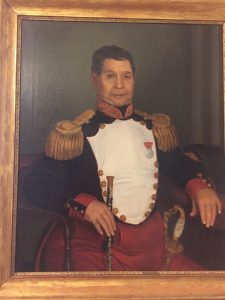 Romero’s first battle was the Combate de San Carlos. Later he helped capture a Spanish frigate at Talcahuano, fought in Chilllán and in the Battle of El Roble. He was commissioned to form a regiment of slaves called the Regimento Ingenuos de la Patria, but this mission failed as the slave owners began to hide their slaves. Romero was taken prisoner at the battle of Rancagua, but was later released and would fight in the Battle of Chacabuco and in the Battle of Maipú.

By 1817, Chile had been functioning independently from Spain for several years, although no formal declaration of independence had been made. Five years earlier the issue of independence had been addressed in José Miguel Carrera’s Provisional Constitutional Regulations of 1812. This document states that no decree or ruling order issues outside of Chile will have any effect and anyone who tries to give them force will be published as a criminal of the state. However the document also recognised the authority of Fernando VII.

After the Battle of Chacabuco, Chile entered a period known as the Patria Nueva. By this point it had all the hallmarks of an independent state: its own currency, flag and coat of arms. The Chilean Declaration of Independence was finally drafted in January 1818 and approved by Supreme Director Bernardo O’Higgins on February 12, 1818 at Talca. The document was then back dated to January 1 1818 in Concepción. 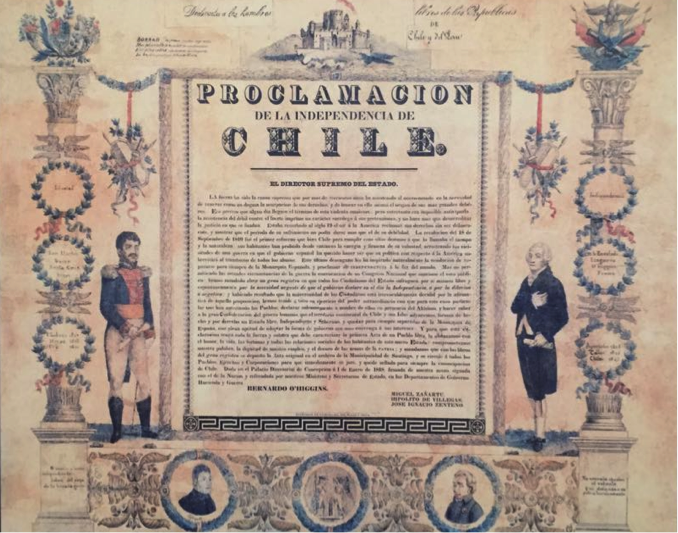