The Battle of Tucumán was a key battle in the Argentine War of Independence. Royalist troops were defeated by the revolutionary army, the Army of the North, which was lead by General Manuel Belgrano. The victory stopped the Royalists who had been taking more territory, and allowed the Argentine troops to consolidate their hold on the region and asserting their authority over the land they were controlling and its borders. The Argentines had lost some territory in the run up to the battle, however. Fearing that they could not defend the region, they had evacuated and destroyed the city of Jujuy, ordering civilians and military personnel to move to the interior of the Tucumán Province, where they could be successfully defended. The intention was originally to retreat to the city of Cordoba, however the people of Tucumán were strong supporters of independence and they convinced Belgrano to fight the Spaniards at Tucumán, agreeing to supply him with payments for his troops and further cavalry troops.

The battle in Tucumán was a success, and the patriots gained valuable ammunition which the Spaniards had left behind. 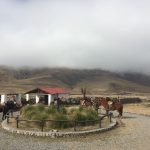 Argentina was a stronghold for the independence forces throughout most of the time when other areas in the continent were struggling against the Spaniards. In the Argentine war of independence ‘gaucho guerillas’ were deployed to stop the advance of Spanish forces. Gauchos are cowboy figures from the Argentine region, famous for their lawless nomadic lifestyle, for herding wild horses and cattle. Due to this nomadic lifestyle, the gauchos knew the Argentine terrain well and this gave them an advantage over the Spanish forces. They played an important part in Argentina’s struggle for independence from Spain and their involvement is commemorated in independence celebrations today, when people dress up as gauchos for the celebrations. This is depicted in the video clip below, taken at Argentinas bicentenery of independence celebrations in 2016.