Our Network Events in Lima, Peru

The Independence Debate:  The Construction of the South American Republics from 1780 to 1850 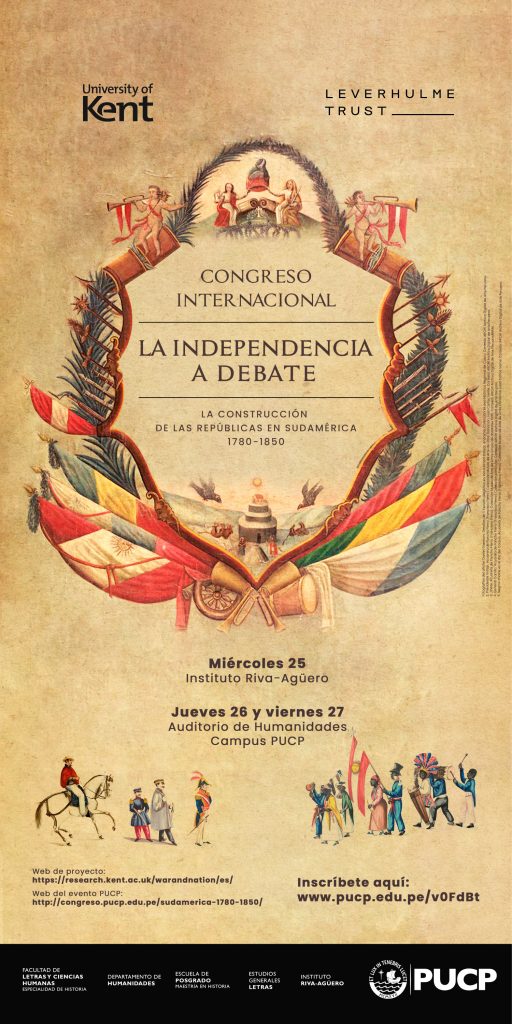 In April 2018 we held an international conference on the construction of South American republics between 1780 and 1850. It was held in the Instituto Riva-Agüero at the Pontificia Universidad Católica del Perú.

The conference was entitled The independence debate. The Construction of the South American republics from 1780 to 1850 (“La Independencia a debate. La construcción de las Repúblicas en Sudamérica, 1780 – 1850”). It was jointly organised by the University of Kent, the Pontificia Universidad Católica of Peru and the Leverhulme Trust. The conference was held in collaboration with the Riva-Agüero institute and the following departments at the Universidad Católica of Peru:

The School of Humanities
The Department of History, Literature and Social Sciences
The Master’s programme
The Department for the Study of the History of Languages.

On Wednesday the 25th April the conference was held in the Instituto Riva-Agüero and on Thursday 26th and Friday 27th April it was held in the Humanities Lecture Theatre in the Pontificia Universidad Católica of Peru.

The objective of the research network is to analyse the processes of independence and the formation of the South American republics between 1780 and 1850.

Our conference marked the bicentenary of the independence of Peru and allowed a space for reflection on the numerous figures that have a place in the complex process of the struggle for independence.

The subjects we addressed include: the formation of the states; political-territorial sovereignty and the new nationalities; the role of war; public opinion; the ideas and the political culture of the time; the transition from the economy of the old regime to that of the republic; the different regions and the role of the popular sectors, the indigenous population and those of African descent.

The full programme can be seen using the link below: