1820 The Spanish Reconquest is Aborted 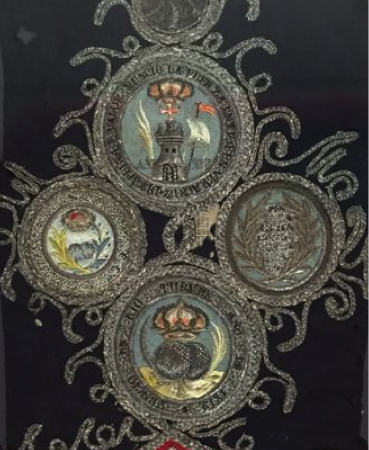 Embellishments on the sleeve of the royalist army uniform

In 1820 events in Spain were to affect the independence movements once again. Spanish troops waiting in Cádiz to be sent to the Americas as part of the Royalist reconquest, became discontent and revolted. This was partly due to poor pay and working conditions and partly due to the way Fernando VII had persecuted liberals even though they had resisted the French.

On his return to the thrown in 1814, Fernando VII had made pacts with the church to restore things to the original form of absolutism that had been in place before his abdication. This did not sit well with liberals who had remained loyal to him throughout the Napoleonic occupation. It was liberals led by the Spanish general Rafael del Riego who revolted in the port of Cádiz in 1820. There were twenty battalions in the port of Cádiz at the time, with Riego in charge of the battalion from Asturias. Riego and other liberals started a mutiny calling for the restoration of the Cádiz constitution. Their original attempts to garner support for an anti-absolutist revolt were unsuccessful in Andalusia but by March their endeavors were gaining some traction due to support in Galicia which gradually spread to other parts of Spain. On the 7th March 1820 the Royal Palace in Madrid was surrounded.

The revolt forced Fernando VII to concede to a series of liberal measures. On the 9th of March 1820 he gave up absolutist power and accepted the reinstatement of the Cádiz constitution.  This concession divided and weakened loyalist opposition to independence in the Americas. In Spain it initiated the period known as the Liberal Triennium (el Trienio Liberal), a period of popular rule which ran from 1820 to 1823.

Eastman, Scott and Natalia Sobrevilla eds. 2015. The Rise of Constitutional Government in the Iberian Atlantic World and the Impact of the Cádiz Constitution of 1812, Tuscaloosa, Alabama: University of Alabama Press.