Following the Napoleonic invasion of the Spanish peninsular and the abdication of Fernando VII, there was a power vacuum, which affected both Spain and Spanish America. This power vacuum led to the formation of juntas, ruling groups which took control of different regions. In the video podcast below, Dr Juan Luis Ossa speaks about the formation of these juntas.

In 1810 news arrived in Caracas that resistance against Napoleon had failed and a junta was duly formed within a few days.  It abolished the slave trade and the Indian tribute and removed trade restrictions such as export charges. It also sent a diplomatic delegation to London, which included Simon Bolívar. The Caracas junta was progressive. However it did not have the support of other cities nearby, which eventually formed their own juntas.

Buenos Aires was also quick to establish a junta when news arrived that the resistance in Spain was failing. A cabildo abierto was called and the argument was made that in the absence of Fernando, juntas should be formed. Votes were cast and a junta was formed. The leadership included Manuel Belgrano, Juan José Castelli and Mariano Moreno and the historical process was called the May 1810 Revolution. The leadership claimed to be acting in the name of Fernando VII but in fact Moreno was more radical. Inspired by the U.S. revolution, he sought to create a South American confederation. 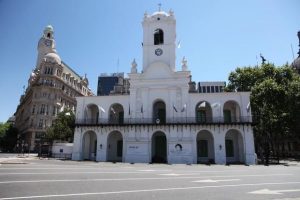 The royal authorities in the Americas did try to prevent these juntas from being formed. In Bogotá for example the Viceroy sent people to prison for attempting to displace royal authorities. However a riot was started in July 1810 and the militias who would normally have stopped such riots declined to do so. The Viceroy was urged to start a junta. The idea was that the Viceroy would actually lead the junta, but it proved unsafe for him to do so and he was therefore taken out of Bogotá for his own safety. On the 20th July 1810 the Colombian Declaration of Independence was made.

Although the juntas held the facade that they were acting in the name of Fernando VII, the formation of these juntas was the first step in the establishment of sovereignty in the various regions of the Americas.

The first Chilean Coat of Arms

In Chile a junta was formed on the 18th September 1810. The image to the left is of the first Chilean Coat of Arms. It was created to replace the Spanish Royalist emblem and was used on the 30th September 1812 in a celebration in the Plaza de Armas in Santiago to commemorate the first national junta. The shield sought to convey that the region was being governed by the provisional junta of José Miguel Carrera.

The coat of arms has the three colours of the Chilean flag in the centre of the image, flanked by two Mapuche figures. The Mapuche people were used in the image in order to define a new Chilean cultural identity based on the bravery and nobility of the Araucans.

In the video below (a TV programme by Canal Encuentro in Argentina), Gabriel Di Meglio and other historians discuss the events that occurred in 1810 when there was a major break with royalist rule. The focus of the programme is on the Río de la Plata region and the establishment of modern day Argentina.