In 1810 the Spanish Governor Vicente Emparán was deposed from his position as the Captain General of the Captaincy General of Venezuela (a colonial administrative region that had been set up in the Viceroyalty of New Granada in 1777 to give the provinces of Venezuela more autonomy). A junta was established in Caracas. Throughout Venezuela there were differences of opinion as to whether the various provinces would follow suit and establish their own juntas; whether they would support the Caracas Junta or whether they would remain loyal to Spain. These differences escalated into a civil war.

At the time, the Caracas Junta proclaimed to be acting in the name of Ferdinand VII, the Spanish king that had abdicated following the Napoleonic invasion of the Spanish Peninsular. However a faction which favoured independence was to become dominant and lead the movement for independence. At the forefront of this independence campaign were Francisco de Miranda and Simón Bolívar, military men who had lived in Europe and been influenced by the ideas of the Enlightenment and the French Revolution. 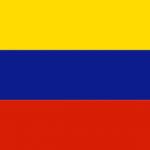 Miranda used the tricolour flag in the independence campaign and the flag forms the basis of the present day Venezuelan flag, which uses the same three colours with the addition of stars and a coat of arms.

In 1811 Francisco Miranda persuaded Venezuela’s National Congress to declare independence. Many regions in Venezuela declared their independence on the 5th of July 1811 and a constitution was written shortly afterwards. However there were also regions which refused to join the republic. These included the cities of Coro, Maracaibo, Guayana and Valencia, which had initially joined but then changed position. Thus an internal war was still raging in the country despite the proclamation of independence. The First Republic of Venezuela was lost in 1812 following the Battle of La Victoria and an earthquake in Caracas. Francisco Miranda and Simon Bolívar led a campaign to gain control of Venezuela once more and the Second Republic of Venezuela was established in 1813. Again this failed, due to local rebellions and to a Spanish royalist reconquest.

Daniel Gutierrez speaks about Venezuela’s declaration of independence in the podcast above.