The project aimed to:

The main thrust of activity in (i), (ii) and (iii) is combining principles of time domain and spectral domain interferometry.

In the first 30 months, several generic multiple path configurations were evaluated, which admit multiple novel implementations, such as active loops placed in the interferometer arms or passive loops equipped with frequency shifters only. A particular implementation based on acousto-optic modulators, has allowed acquisition of 6 images at the same time from different depths when using a broadband source. When using a swept source, a multiplication by a factor of three of the axial range determined by the optical source was also demonstrated. 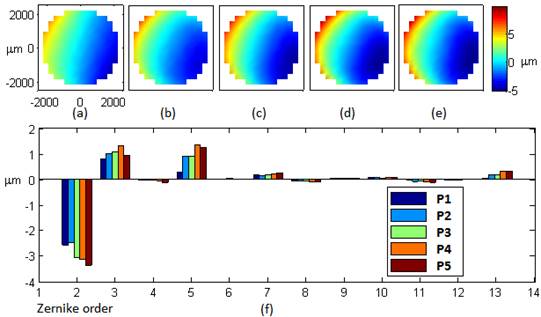 First demonstration of video rate coherence gated wavefront measurements. Shack–Hartmann wavefront sensors (SH-WFS) have little sensitivity in depth and hence are unsuitable for microscopy and are limited for retinal imaging. We demonstrate the first direct Shack–Hartmann measurement of wavefront originating from a multiple-layer target, in the presence of significant stray reflections that render a standard SH-WFS inoperable. A coherence-gate SH-WFS is implemented by adding time-domain low-coherence reflectometry gating to an SH-WFS configuration. The depth resolution is determined by the operational depth selection of the coherence gate, much narrower than the depth range of the SH-WFS. Five distinctive wavefronts are measured from five layers of a multiple-layer target. This paves the way toward depth-resolved wavefront sensing, which can significantly improve adaptive optics closed loops applied to microscopy and imaging of the retina.

A balanced detection spectrometer based OCT configuration, equipped with two InGaAs cameras has proven enhanced performance in terms of elimination of fixed pattern noise and better tolerance to the power fluctuations in the system. At the midway-point, the research resulted in 9 peer reviewed papers (6 in open access), 40 communications (9 in proceedings of international conferences), two book chapters and a patent application.

Publications resulting from the ERC support.