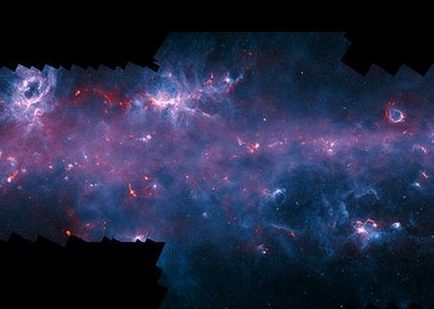 Galactic Star Formation and the Structure of the Milky Way

Massive stars (> 8 Msun and 103 Lsun) play an important role in many astrophysical processes; from the formation of the first solid material in the early Universe to their substantial influence upon the evolution of their host galaxies and future generations of star formation. Given the profound impact massive stars have, not only on their local environment through powerful outflows, stellar winds and optical/far-UV radiation, but also on a Galactic scale, it is crucial for a large range of astrophysical fields to understand the environmental conditions and processes involved in their birth and the earliest stages of their evolution. However, the underlying physical processes involved in the formation of massive stars are still poorly defined and this presents a major hurdle in understanding galaxy formation and evolution.

Massive stars form in clusters, and due to their rarity are generally located at greater distances than regions of low-mass star formation. Moreover, they evolve much more quickly than low-mass stars, reaching the main sequence while still deeply embedded in their natal environment. As a consequence, understanding how these objects form is observationally more challenging than for low-mass stars, and large spatial volumes need to be searched in order to identify a sufficient number of sources in each evolutionary stage. Only then can we begin to understand the processes involved in the formation and earliest stages of massive star formation.

The two main research goals are:

1) to test the proposed evolutionary sequence for massive star formation and determine statistical lifetimes for each stage and the initial conditions; and

2) use the properties of these massive star forming clouds (mass, luminosity, temperature etc) to evaluate the role the environment and Galactic location plays in the star formation process.

To accomplish these goals we work primarily with a number of Galactic plane surveys that cover the infrared, submillimetre and radio wavelengths; these include the RMS survey, CORNISH radio survey and the ATLASGAL survey. We are using these surveys to compile a large and statistically representative catalogue of massive star forming regions and investigate their physical properties as a function of Galactic position, environment and evolutionary phase.