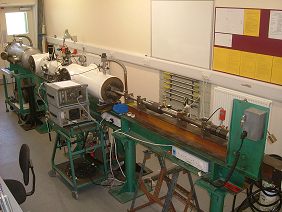 Photograph of the LGG

The light gas gun (LGG; click here of a 3D VR tour) is used for investigations of hypervelocity impact phenomena. Bodies in the Solar System are subject to such impacts (e.g. craters on the Moon and the Earth) and these are understood partly via experiment in the laboratory. For example, experiments have recently been carried out in our laboratory at Canterbury which have used ices as the target material (simulating impacts on the icy surfaces of the moons of the outer planets). 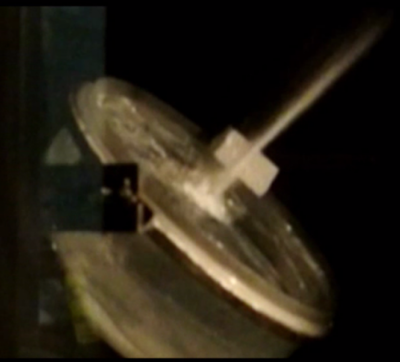 The point of impact from a 1.5 mm glass projectile into an ice over water target simulating the surface of an icy moon with subsurface ocean. The target is at a 45 degree angle and the impact speed is 5 km/s.

As well as large impacts, any surface that is exposed to space will be hit by much smaller dust-like particles that are found in space and the LGG is ideal for studying such impacts. We can also study how the materials used in constructing satellites behave when they are struck at high speed by these microscopic bodies. Solar cell materials, carbon fibre composites, and aluminium have all been studied extensively. This flux of small particles is also of interest from a scientific viewpoint, for which we have built several experiments that have flown on spacecraft to measure the dust population around the Earth. These experiments (such as those on LDEF, EuReCa, and MIR) have relied on targets being hit by micro-meteoroids and such sensors can be tested and calibrated using the LGG. For example, many of the detectors flown in space count the number of particles which penetrate thin metal foils.

There is also a large amount of interest in the capture and analysis of these small particles. These bodies may be micro-meteoroids, specks of space-debris, or even dust kicked off from active comets. Normally in hypervelocity impacts such particles vaporise on impact. However, it is possible to capture them relatively intact if the target is a very low density material such as aerogel. The low density, around 0.1 gm cm-3, of aerogel (click here to see some aerogel) means that bodies are gradually slowed down when they hit, rather than being explosively destroyed upon impact. If the collision is sufficiently ‘gentle’ then most of the original particle can be trapped, returned to Earth, and then analysed in a laboratory. In this picture a 50μm body has been captured by an aerogel target, the track of the body is clearly shown by the disrupted material in its wake.

Projectile Type: Can fire single projectiles between 0.1 mm and 3.0 mm in diameter, or 1 micron to 400 microns diameter bodies in buck-shot style firings.

Target Specifications: Objects of up to 1m x 1m x 1m can be used as targets. In addition (depending on the size of the target) and there is also an option to have the target
cooled by liquid nitrogen, or heated to up to 1000 K in our customised target holder.