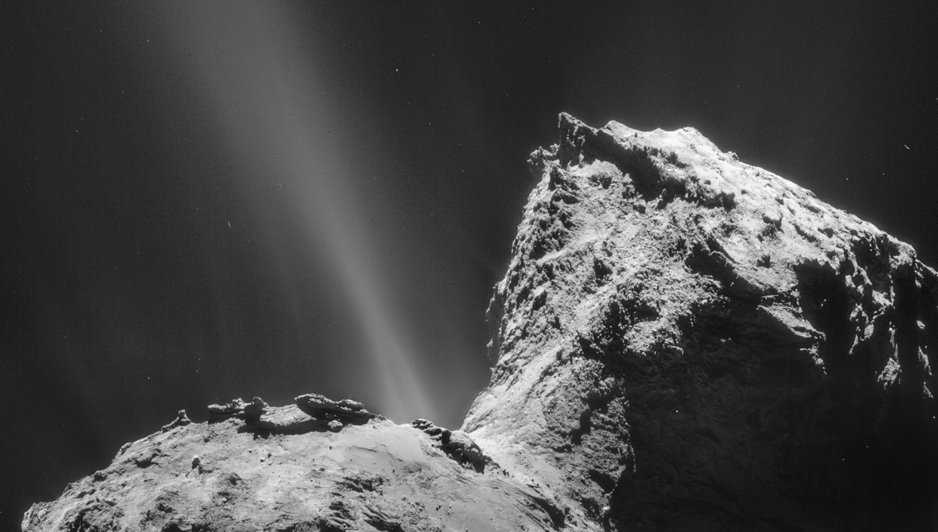 Properties of the icy cores of comets

Using Ground and Space Based Telescopes, and Visiting Spacecraft

a) Observations of Cometary Nuclei at Optical and Thermal-Infrared Wavelengths from Ground- and Space-Based Telescopes:

The central icy cores of comets are remnant material from the original accretion disc of our solar system and preserve, to varying degrees, a record of the conditions that existed during its formation. Understanding the physical, compositional, and dynamical properties of comets is crucial if we are to understand how our solar system formed, its subsequent evolution, and how it will likely evolve in the future.  Prof. Lowry has been active in this field since completion of his PhD thesis, which included a measurement of the size distribution of Jupiter-family comets (Lowry et al. 2003, A&A 397). SEPPCoN is an on-going international collaborative project whose goal is to measure the physical properties of Jupiter-family cometary nuclei.  We observe the comets when they are far enough from the Sun that the masking effect of the comet’s atmosphere or ‘coma’ is greatly reduced. The datasets include thermal-infrared imaging from NASA’s Spitzer Space Telescope, as well as optical imaging from many large ground-based observatories.  From these data we can measure the optical and thermal brightness of the comet nuclei, which can be used to determine their sizes and albedos simultaneously.  Other highlights in this area include one of the earliest detections of a cometary dust trail at optical wavelengths (Lowry et al. 2003, LPSC 34, Abstract 2056), and observations that helped confirm the first inter-asteroid collision (Snodgrass et al. 2010, Nature 467).

Since 2005, Prof. Lowry has been a member of the science team for the OSIRIS optical camera instrument on board the recent Rosetta spacecraft comet-explorer mission. During Rosetta’s ten-year flight the spacecraft crossed the asteroid belt, encountering two asteroids of very different compositional classes. Its final destination was the Jupiter-family comet 67P/Churyumov-Gerasimenko (or ‘67P’ for short). After entering orbit around the comet in 2014, the spacecraft released a small lander Philae onto the icy nucleus, then spent the next two years orbiting the comet to study the evolution of its surface as it approached the Sun. Some selected highlights include:  Lowry and Rozek were co-leads with S. Mottola on a study reporting the rotation period change on Rosetta’s target comet, 67P, from early OSIRIS imaging data (Mottola, Lowry, Rozek, et al., A&A, 2014). This is an important result for understanding many physical processes occurring on the comet. Lowry co-authored a paper in Nature (Massironi et al. 2015) reporting how the internal structure of comet 67P is layered, indicating that very low-velocity collisions were occurring between fully formed comets in the early solar system. Lowry co-authored a paper in Nature Astronomy (Pajola et al. 2017), reporting the first unambiguous link between an outburst and a cliff collapse on a comet. A new dust-plume formation mechanism was established that does not require the breakup of a pressurized crust or the presence of supervolatile material, as suggested by previous studies. Lowry co-authored a paper in Nature (Vincent et al. 2015), reporting that sinkhole-formation processes are responsible for the pit structures seen on comet 67P.  Just a small fraction of the images have been analysed so far, and analysis of the imaging data is on-going.

Early detection of jets from Rosetta target comet 67P/Churyumov-Gerasimenko and modelling of their source locations on the nucleus surface. Collimated jets of gas and dust particles were detected on approach to the comet. Modelling tracked their locations to discrete areas on the nucleus surface. This is a probability map showing where the source regions are. Of particular note is the active region at the interface between the two lobes referred to as the ‘neck’ region (Lara, Lowry, Rozek, et al. 2015, A&A 583).