a) Direct Detections of the Asteroidal YORP Effect from Ground-Based Optical and Thermal-IR Observations and Modelling:

The YORP effect is a torque that can modify the rotation rates and spin-axis orientations of small asteroids in the Solar system. YORP torques are caused by the combined effects of incident solar radiation pressure and the recoil effect from anisotropic emission of thermal photons. Several observed phenomena in asteroidal science indicate that such a torque acts upon the surfaces of asteroids and meteoroids, for which the YORP effect is the only realistic mechanism. Despite its importance, there existed only indirect evidence for the presence of YORP on solar system objects, until recently. The first direct detection of the YORP effect was achieved by Prof. Lowry and colleagues, by conducting optical and radar observational campaigns over 4 years on the small Near-Earth Asteroid, (54509) 2000 PH5 (Lowry et al., 2007, Science 316, 272-274; Taylor et al., 2007, Science 316, 274-277). Since then, the effect has been observed on five other asteroids.

Prof. Lowry leads an on-going observational programme which makes use of telescope facilities at the European Southern Observatory (ESO), particularly the 8.2m VLT and the 3.5 NTT facilities.  Other facilities include the 5m Hale Telescope at Palomar Observatory (California, USA), the 2m Robotic Liverpool Telescope (La Palma, Spain), the 2.5m Isaac Newton Telescope (La Palma, Spain), among many others. We use these telescopes to obtain optical photometric lightcurves, which can be used to construct convex 3-D shape models and spin-state solutions for these bodies.  This programme is designed to survey a large sample of small Near-Earth Asteroids (NEAs) at to detect the YORP effect acting on these bodies, and to determine their likely surface compositions.  Thermal-IR observations are also taken for detailed thermal analyses of their surfaces, important for constraining theoretical determinations of the strength of the YORP effect acting on our target NEAs. This programme is a collaboration with colleagues from the Open University, Queen’s University Belfast, Max Planck Institute for Solar System Research (Germany), NASA’s Jet Propulsion Laboratory (California, USA), and the Planetary Science Institute (Arizona, USA). 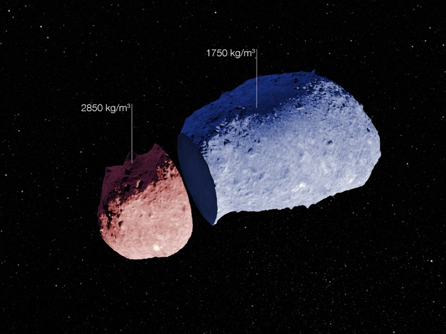 Prof. Lowry and colleagues also detected the YORP effect acting on the small Near-Earth Asteroid, Itokawa, which was also visited by the Japanese Hayabusa spacecraft. The strength of the YORP effect was very different to what was predicted by theory, which led to the first measurement of internal density differences within a solar system small body (Lowry et al. 2014, A&A 562). This result is important for understanding how binary asteroids form and evolve (Image Credit: ESO, S. Lowry).

b) Radar Observations of Near-Earth Asteroids:

Radar is a uniquely powerful source of remote sensing information about the physical properties and orbits of asteroids, specifically NEAs. Measurements of the echo power in time delay (range) and Doppler frequency (radial velocity) produce two-dimensional ‘images’ that can provide spatial resolution as small as decameters. With adequate orientation coverage, such observations can be used to construct detailed 3D shape models and precisely define the spin-state.  We are active in this area and conduct observations at the Arecibo Observatory.  We collaborate with colleagues at the NASA’s Jet Propulsion Laboratory/California Inst. Of Technology (California, USA), Arecibo Observatory (Puerto Rico, USA), Lunar and Planetary Laboratory (Arizona, USA), and the SETI Institute (California, USA). 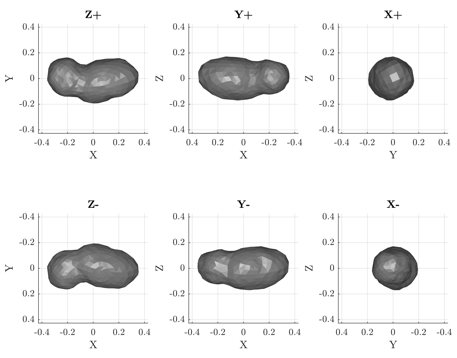 3-D Shape Model of Near-Earth Asteroid 1999 JV6. Our radar observations and shape modelling reveal a highly bifurcated shape, indicating that this is a collapsed binary object, and also likely to be of cometary origin (Rozek et al. in-preparation).

In collaboration with colleagues from the Centre for Astrophysics and Planetary Science, we developed a new approach to hydrocode modelling of asteroids which treats the internal structure of the target asteroid as a ‘rubble pile’, which is a more realistic internal structure model for asteroids.  This study was published in Monthly Notices of the Astronomical Society in 2017 (Deller et al. 2017), and led to two international awards for PhD student Jakob Deller, who carried out the study (PISTA award and the Springer Thesis Prize).  This work is important for understanding how asteroids respond to high speed impacts (km/s) and how their interior structures can be modified from this process, which in turn aids in our understanding of the evolutionary processes that asteroids experience.  This also has implications for asteroid impact mitigation scenarios.  Very little is known about how asteroids are built and how they would respond to kinetic impactors for example. 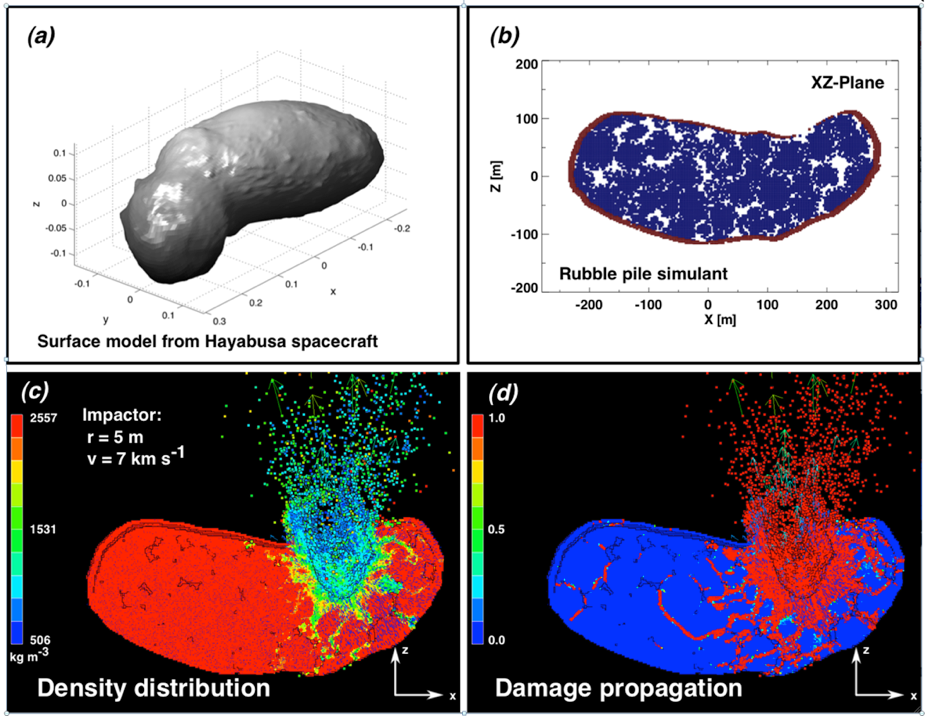 A New Approach to SPH Impact Modelling of Asteroids. Our new approach takes into account both realistic shape models as well as more realistic internal-structure models, (e.g. the canonical ‘rubble pile’, a loose conglomeration of smaller accreted fragments – Weissman, Asphaug and Lowry, 2004, “Comets II”, Univ. of Arizona Press Series). Both aspects have major effects on the outcomes of various impact simulations that we have run so far. a) In this example, we start off with the actual shape model of Itokawa as determined from the Hayabusa spacecraft. b) We then fill such shapes with SPH particles with realistic distributions of macroscopic voids and ‘solid’ SPH-particle conglomerate spherical structures. In this example, the radii of these spheres vary in the range of 15–40 m, and their size distribution follows an empirical power low. Panels (c – d) are snapshots of a slice through the asteroid, 4.2 ms after being struck by a 5m particle travelling at 7 km s-1. Panel c) represents the evolving density distribution within the body and the ejected material; d) represents the propagation of ‘damage’ or relative displacement of material through the body