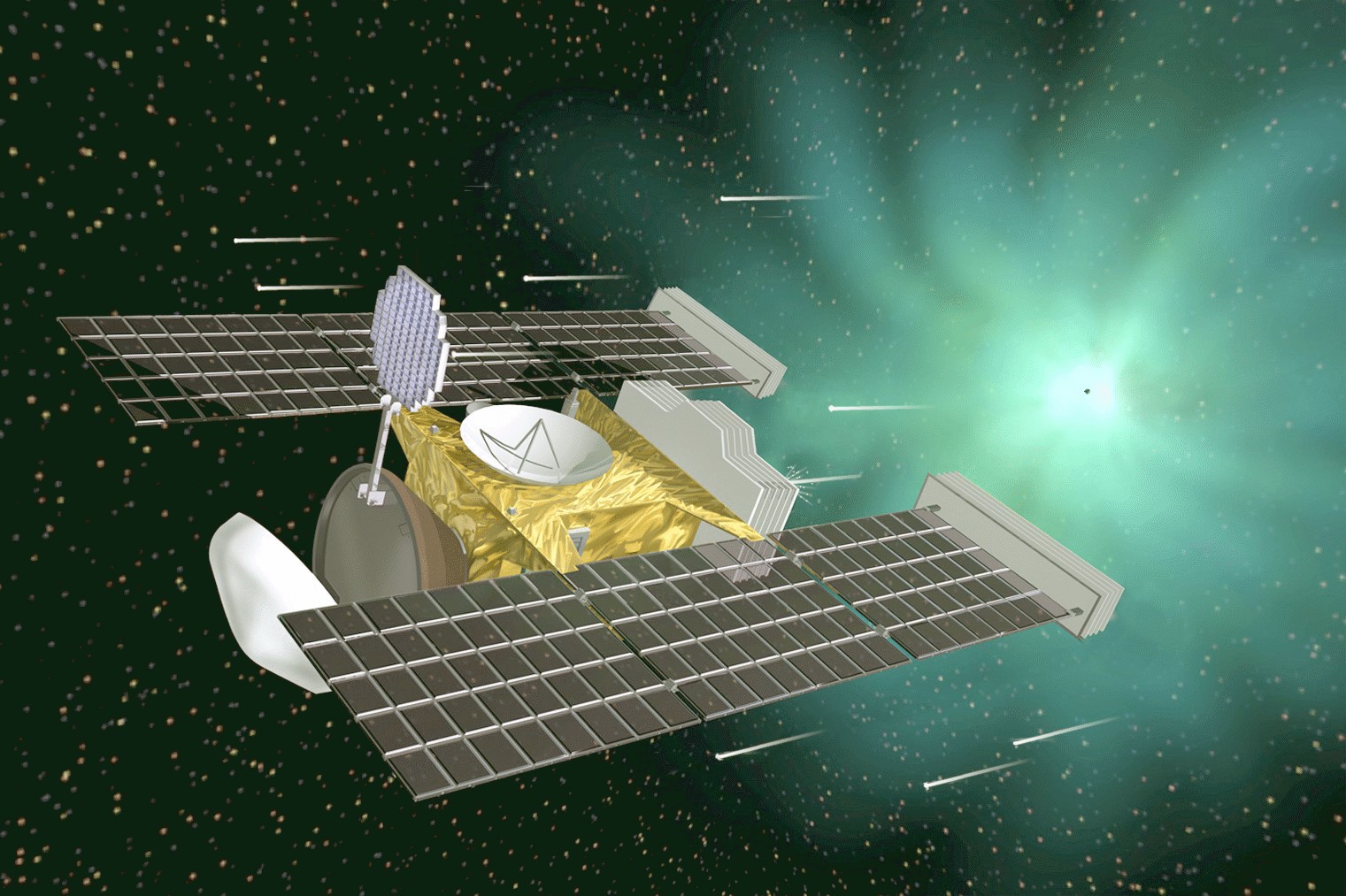 Stardust was a NASA space mission which collected cometary dust from comet 81P/Wild 2 and returned it to Earth for analysis. The mission also collected interplanetary and interstellar dust during its flight.

Kent has been able to play a significant role in this mission. Originally invited to join Stardust in 1996, Kent calibrated the bumper-shield dust impact sensor used during the cometary fly past, since several years now Kent has focussed on the capture of the cometary dust in the aerogel carried by the spacecraft and in the craters made by dust impacts on aluminium foils also carried by the spacecraft (and were members of various Preliminary Examination Teams making the first look at these samples). Kent is also participating in the on-going Interstellar Dust Preliminary Examination Team.

The NASA Stardust mission flew past comet 81P/Wild 2 in 2004 at a speed of 6.1kms-1 and captured dust samples freshly emitted from the comet nucleus. The samples were returned to Earth for laboratory analysis in 2006. The mission was led by Professor Don Brownlee of Washington Univ. and the dust collection in aerogel by Dr. Peter Tsou of JPL. Details of the mission from launch to return can be found at http://stardust.jpl.nasa.gov/home/index.html. An image of comet 81P/Wild 2 is shown below (taken during the fly by in 2004).

Images can be found at: http://stardust.jpl.nasa.gov/photo/wild2.html.

Kent’s involvement with Stardust goes back to pre-launch. In 1996 the Kent group (then led by Prof. J.A.M. McDonnell, now retired, and including Prof. Mark Burchell) started calibrating the bumpershield which protected the main spacecraft against impact damage. This work used the group’s two stage light gas gun. It formed the PhD thesis work of B.A.M. Vaughn (2000) and appears in Tuzzolino et al., J. Geophys. Res. 108, 10.1029/2003JE002086 (2003).

Since 2000, the Kent group have worked on understanding the impact mechanisms undergone by dust when it hits aerogel and aluminium foils (the Stardust collection media) at 6.1kms-1. A review of aerogel (a highly porous, under-dense material, here made of SiO2) and its use as a dust collector in space can be found in Burchell et al., Cosmic Dust Collection in Aerogel, Annual Reviews of Earth and Planetary Science, 34 , 385 – 418, 2006.

In the 1990s we had shown that tracks line up with their impact direction over a wide range of angles (Burchell et al., Capture of Hypervelocity Particles in Aerogel: in Ground Laboratory and Low Earth Orbit, Planetary and Space Science 47, 189-204, 1999). Then we determined the velocity dependence of track length in aerogel, and in the same paper showed for the first time that Raman spectroscopy could be used to identify mineral grains after capture in aerogel (Burchell et al., Capture of Particles in Hypervelocity Impacts in Aerogel, Meteoritics and Planetary Science 36, 209-221, 2001). This was followed up by showing that Raman could identify organic materials captured in aerogel (Burchell et al., Identification of organic particles via Raman techniques after capture in hypervelocity impacts on aerogel, Journal of Raman Spectroscopy 35, 249-253, 2004) and a wider study of Raman spectroscopy on mineral grains captured in laboratory experiments was also made (Burchell et al., Identification of Minerals and Meteoritic Materials via Raman Techniques after Capture in Hypervelocity Impacts on Aerogel, Meteoritics and Planetary Science, 41, 217-232, 2006). Later we also showed that it was possible to get recognizable Raman signals from minerals after they had impacted aluminium foils producing impact craters, a process so violent it had previously been widely thought to be fully disruptive of any mineral structure (Burchell et al., Identification of Mineral Impactors in Hypervelocity Impact Craters in Aluminium by Raman Spectroscopy of Residues, Meteoritics and Planetary Science 43, 135-142, 2008).

In parallel to this, we set up an aerogel manufacturing facility. This consists of an autoclave that can reach the necessary temperatures and pressures to make aerogel (ca. 250 ℃ and 120 bar). This formed part of the MSc thesis work of N. Foster (2006). The lowest density aerogel made so far at Kent had a density of 7.5kgm-3.

Before the Stardust return we also started a programme of calibration work using our two stage light gas gun. This provided calibrations for both the aluminium foil impact craters and the aerogel tracks. This work has been reported extensively in for example on foils: Kearsley et al., Analytical scanning and transmission electron microscopy of laboratory impacts on Stardust aluminium foils: interpreting impact crater morphology and the composition of impact residues, Meteoritics and Planetary Science 42, 191-210, 2007; Kearsley et al., Laboratory simulations of impacts upon aluminium foils of the Stardust spacecraft; Calibration of dust particle size from comet Wild2, Meteoritics and Planetary Science, 41, 167-180, 2006, and in aerogel: Burchell et al., Characteristics of Cometary Dust Tracks in Stardust Aerogel and Laboratory Calibrations, Meteoritics and Planetary Science 43, 23-40, 2008.

The results of all this preparatory work was that led by Burchell, Kent took part in four of the Preliminary Examination Teams (PET) which analysed the first Stardust samples after the mission returned them to Earth in 2006. We have continued to analyse samples after the PET period was completed and work is on -going. Analysis of aerogel track morphology formed part of the MSc of S.A.J. Fairey (submitted, 2008). Raman examination of samples will form part of the PhD thesis of N. Foster (to be submitted 2009). We have been looking at the olivines and iron oxides in comet Wild 2 and are starting to try to understand the organic content.

Recent Kent work has also highlighted the size distribution of the cometary grains. A graph of cumulative size is shown below and is explained in Burchell et al., Characteristics of Cometary Dust Tracks in Stardust Aerogel and Laboratory Calibrations, Meteoritics and Planetary Science 43, 23-40, 2008.

The results so far of the cometary dust analysis by all Stardust team members suggest that a large fraction of the dust was formed under high temperatures presumably in the inner Solar System. To have ended up in a comet, this implies a high degree of radial mixing in the early Solar System. There is also a relative lack of pre-Solar grains and GEMS (glass embedded metal and sulfides which were held to be indicative of cometary dust).

In 2008, Burchell was invited to write a major review of Stardust results which is now in press (Burchell M.J., and Kearsley A.T. ‘Short Period Jupiter Family Comets after Stardust’. Planetary and Space Science, 2008).

Modelling: A recent development at Kent is the start of hydrocode modelling of the dust collection by Stardust. This is being carried out by Dr. Mark Price and will help understand the temperature and pressure regimes the cometary dust was subject to during capture. It will also permit a calibration of the capture of the interstellar dust (which occurred at speeds which exceed those available from light gas guns).

Collaborations: The Stardust work at Kent has been carried out as part of extensive collaborations with other groups. We have (and continue to) worked closely with staff at (in the UK): The Natural History Museum, Imperial College, Leicester and more. Internationally: US (Univ. of Washington, Berkeley, LLNL, JPL, NASA, etc.), France, Spain and Japan.

Funding: Kent’s work on Stardust has been funded by STFC and its predecessor PPARC. We currently (2008-2011) hold a STFC grant which includes provision for on-going Stardust work.

Kent authors have appeared on many Stardust related papers, including 5 in Science:

And 6 papers in a special issue of Meteoritics and Planetary Science in 2008.