Our Network Meetings in Tucumán and Buenos Aires

Network meetings took place in Tucumán and Buenos Aires to coincide with the anniversary of the 9th July 1816 declaration of independence.

The network held an international round table event: “La independencia en perspectiva. Historiadores tucumanos conversan con colegas latinoamericanos” at the National University of Tucumán. A video podcast of the round table event can be seen below:

The discussion explored the dynamics of the different independence processes with renowned historians from the region (Gabriela Tio Vallejo, María Paula Parolo, Marisa Davio, Facundo Nanni, Gabriela Lupianez y Ana Wilde). The event was open to the public and was well attended, particularly by history students. 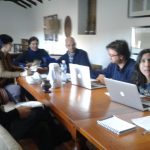 In Tucumán the co-investigators also discussed their individual research projects and attended the official celebrations of argentine independence.

Alejandro Rabinovich spoke about his research on the relationship between military history and the process of state formation. His research focuses on the rates of militarization of each country; the types of military organisations adopted and the types of combat used.

Claudia Rosas spoke about the way she is tracing a genealogy of counterrevolutionary discourse in Peru between 1780 and 1824. Rosa’s research seeks to identify the stages of development that counter-revolutionary discourse underwent during the process of Independence in Peru in order to understand how it was articulated in the different political regions of the period being discussed.

Juan Luis Ossa spoke about the process of state construction in South America, particularly with regard to the consolidation of sovereign spaces.

Marcela Echeverri spoke about her research on slavery in Gran Colombia. Her research seeks to recast Gran Colombian slavery and anti-slavery in the hemispheric dimensions of its time and show that, rather than seeing mainland Spanish America as peripheral to the history of Atlantic slavery and anti-slavery, historians should consider the region as the epicentre of larger historical dynamics that shaped the meaning of freedom in the American continent.

Natalia Sobrevilla spoke about the links between War and the emergence of Nations in South America, specifically state formation and political culture in the Andes.