All are welcome to attend in person at Cornwallis East Seminar Room 2 or to follow the live stream on Microsoft Teams.

18.00, dinner and drinks (following the seminar)

Please email Dr Corey Wrenn via c.l.wrenn@kent.ac.uk if you’d like to join seminar participants for vegan food and drinks at The Lady Luck in Canterbury city centre. 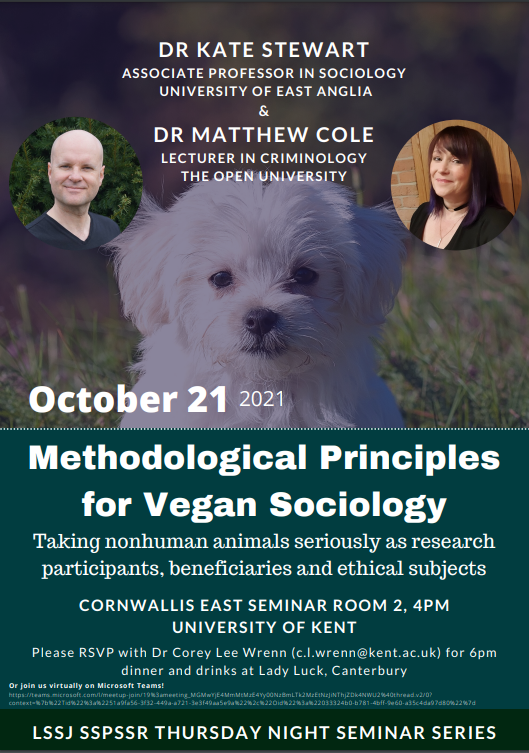 An online conversation about strategies for sustainable, local shopping in Canterbury with emerging scholars in Environmental Politics at the University of Kent.

The World is on Fire: Animal Agriculture, Climate Change, And The Path Forward

Watch it again online
‘In 2006, the UN’s Food and Agriculture Organization (FAO), issued a report titled “Livestock’s Long Shadow,” concluding that animal farming presents a “major threat to the environment” with such “deep and wide-ranging” impacts that it should rank as the leading focus for environmental policy. Recently, these stakes were raised again when the UN determined that the world has only fourteen years to act to prevent catastrophic effects due to climate change. The UN Convention on Biological Diversity estimates as high as 150 species go extinct each day; the UN determined animal agriculture represents the single largest cause of habit loss, species extinction, and biodiversity loss. Most importantly, exponentially more animals are killed, in worse conditions, every year: My first publication in critical animal studies, entitled “Green Eggs and Ham: The Myth of Sustainable Meat and The Danger of the Local” was published in 2010; at that time, the world raised and killed approximately 60 billion land animals each year. Today it is 80 billion; the UN estimates by 2050, the number will exceed 120 billion. The world is on fire.

‘The response by many, including both advocates for animal agriculture and animal rights, has been three main strategies:

‘However, in reality none of these proposed solutions will work. Indeed, most – if not all – will in reality make the environmental effects of animal agriculture worse. Instead, I argue, we need a social justice based approach to animal advocacy, based on directly confronting speciesism and anthropocentrism, that seeks to build solidarity between animal rights and other social justice movements to affect broad based change. We are running out of time. To paraphrase the famous maxim attributed to Marx: As scholars, we no longer possess the luxury to only understand the world; we have to change it.’

An enlightening talk by Randall S. Abate, Endowed Chair in Marine and Environmental Law and Policy, and Professor, Department of Political Science and Sociology at Monmouth University.

Future generations, wildlife, and natural resources – collectively referred to as “the voiceless” in this presentation – are the most vulnerable and least equipped populations to protect themselves from the impacts of global climate change. Domestic and international law protections are beginning to recognise rights and responsibilities that apply to the voiceless community; however, these legal developments have yet to be pursued in a collective manner and have not been considered together in the context of climate change and climate justice. This presentation first identifies the common vulnerabilities of the voiceless in the Anthropocene era. It then proposes how the law can evolve to protect their interests more effectively through a stewardship-focused and rights-based system derived from the mandate inherent in the concept of sustainable development.

A roundtable discussion on the impact of the COVID-19 on contemporary social movements.

Whilst the pandemic has limited opportunities for many traditional repertoires of activism and protest, certain movements – notably Black Lives Matter – have gained considerable traction and visibility during this time. Moreover, the origins of the pandemic have foregrounded the importance of food justice and the environment. The panel will reflect on these challenges and opportunities, as well as discuss the future of social movements under pandemic conditions. 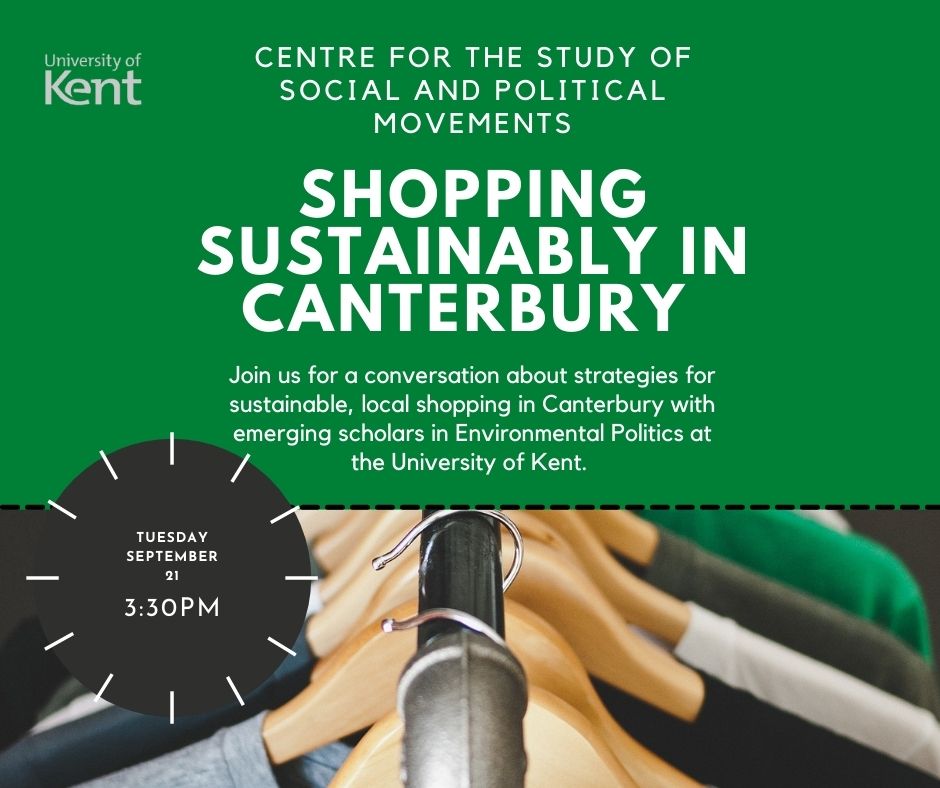 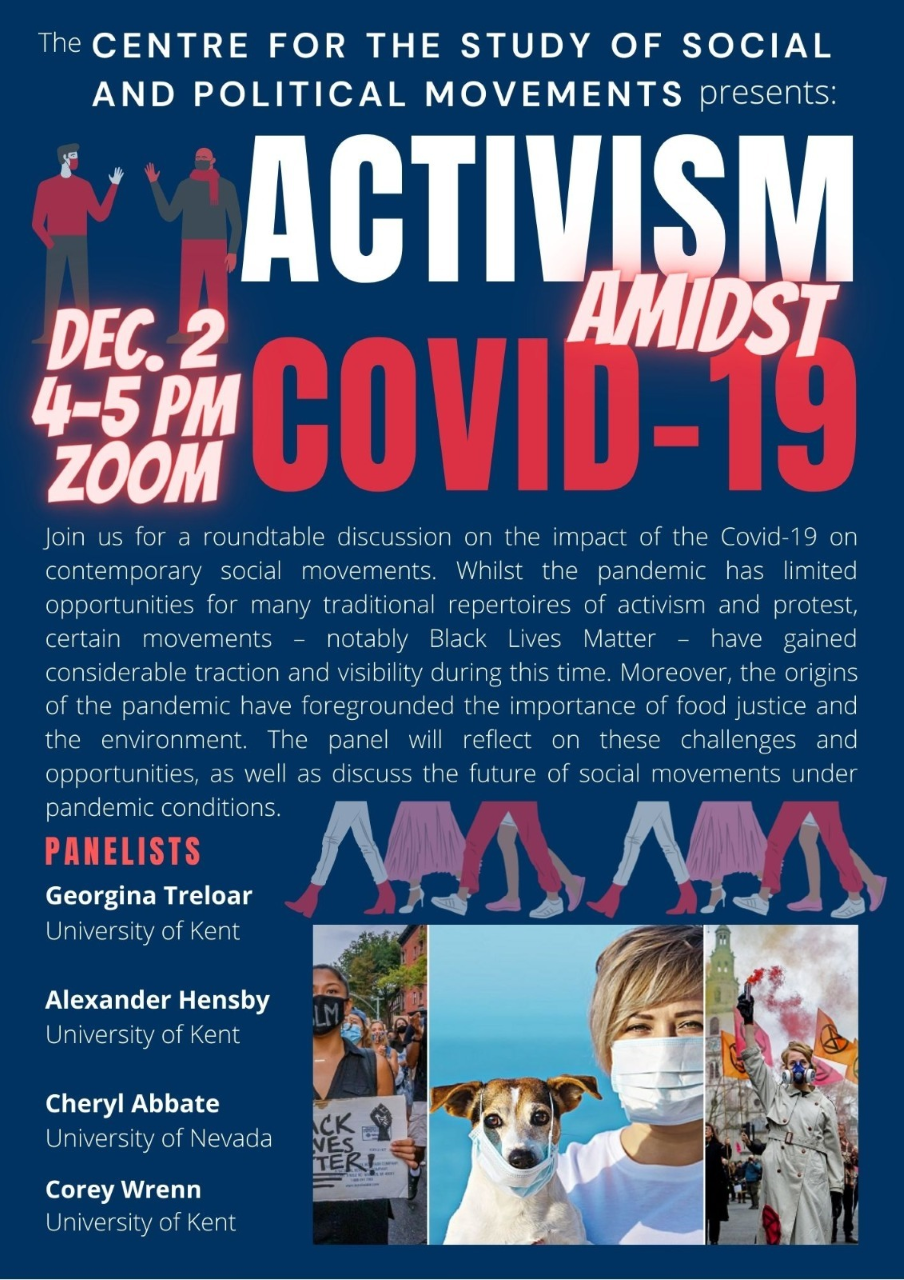