Associate Lecturer, Facilitator for the War and Nation Research Network
Go to academia-edu Go to linkedin

Lorna received her doctorate from King’s College London. She was an associate lecturer at the University of Kent and the research facilitator for the War and Nation Research Network from 2015 to 2018. During this time she wrote and translated the history pages for this website and helped with the organisation of our international events.

Lorna’s broad interests include art, literature, film and theatre from Latin America, particularly from Chile and Argentina. She has a keen interest in the visual arts, focusing on textile art movements, surrealism, Pop Art and muralism.

Lorna’s doctoral thesis was on Violeta Parra’s art and she continues to publish on the embroideries, sculptures and paintings that Parra produced in the 1960s. Lorna is also interested in the relationship between symbolic representations and transitional justice. 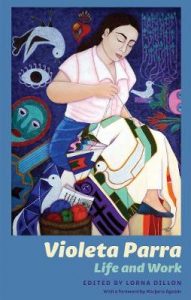 She has published several journal articles and book chapters on Violeta Parra’s art and on the translation of the grotesco criollo theatre movement in Argentina. Full-text versions of some of Lorna’s publications can be found here.

Lorna has received funding from the Arts and Humanities Research Council, the Chilean Consejo de la Cultura y los Artes, the Higher Education Funding Council for England (via the Culture Capital Exchange) and the Institute of Fine Art of the University of New York.