Our Network Meetings in Bogotá and Medellín

The Restorations, between Europe and America 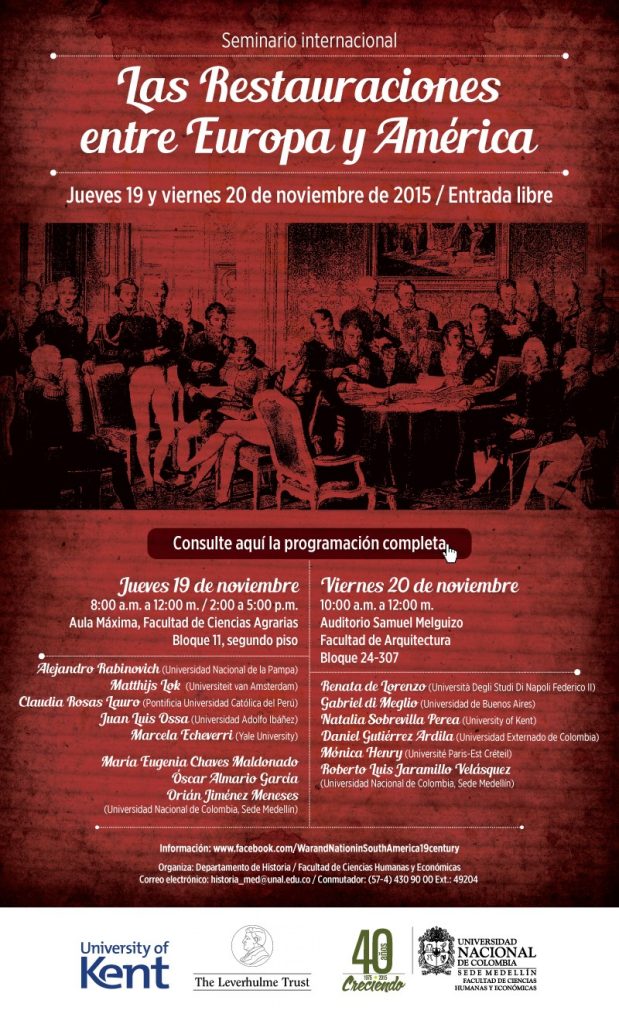 In November 2016 the War and Nation research network held the first network meeting in Bogotá and Medellín.

Over the space of a week the members of the research group established the key areas of work that the project would focus on during future network meetings.

The researchers had discussions about the period of the restoration in South America. These discussions took place between the coinvestigators on the project, with local invited speakers  such as Isidro Vanegas, Francisco Ortega, Marixa Lasso, Alexander Chaparro, Julián Rendón and Óscar Almario. The symposium also discussed the theme of the restorations with the international invited speakers Renata De Lorenzo, Matthijs Lok and Mónica Henry.

In the first phase of the meeting, held in the city of Bogotá, the group had two meetings in which the themes of future conferences were established.

The research network also visited the Chingaza national park and the National Museum. They also held an international conference in the Universidad Nacional.

The first session in the conference took the form of a discussion between the researchers on the War and Nation research network and the international invited speakers.

The second part of the conference took the form of a round table debate in which the participants were able to discuss the key shared characteristics of the experience of the restorations in Europe and South America.

The research network also held part of the conference in the city of Medellín and the format was the same as described above. The colloquium was held over two days in the headquarters of the Universidad Nacional (first with discussions among panel members and later in the form of a round table in which all attendees were able to participate.

The research team also held a further meeting to discuss the conclusions from the symposium. The research team were also able to visit the Museo de Antioquia and the colonial city of Santa Fe de Antioquia, where the co-investigators visited monuments related to the independence period and studied collections of paintings of the era.