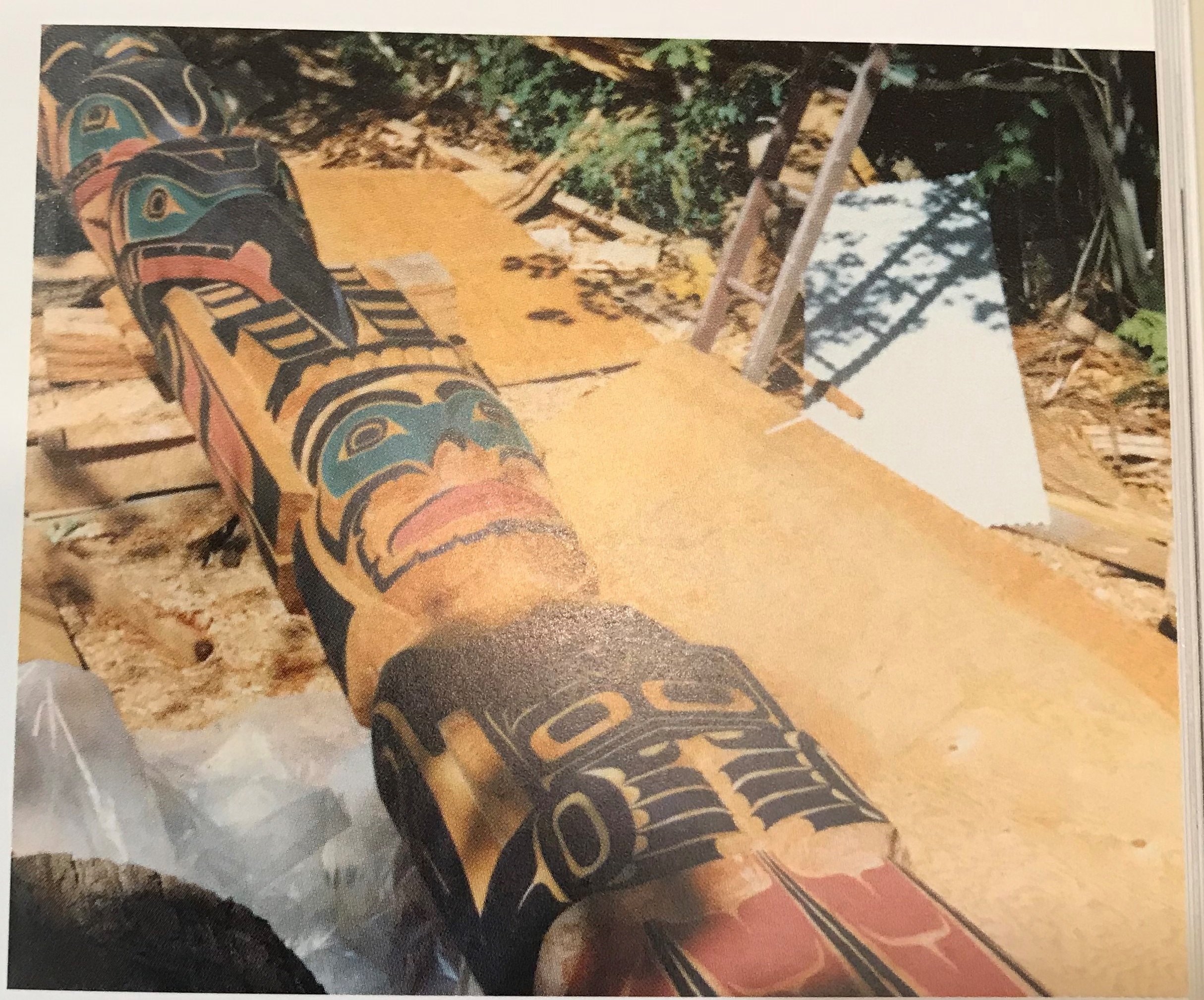 TOTEM: the word totem originates from the Ojibwe “odoodem”, which means “(his) kinship group”. Ojibwe people came from the Eastern Woodlands and Great Lakes area, several thousand miles from the peoples who actually carved totem poles… A totem (dodem) is a spirit being, animal, or similar, that represents a group of people usually connected by kinship.

To read more about the history of totem poles, visit this page put together at the University of British Columbia.

When they first hear about it, most people’s response is, “What, Salford has a totem pole?” Every now and then, however, someone will mention, “Oh yes, I used to walk past it as a child” or some such gesture of recognition; or, “I remember that pole arriving in Salford!” When briefly on display–horizontally–at Media City, in August 2018, it became clear that it held a place in the memories and hearts of many in Salford.  This website presents its story.

In 1969, seeking to commemorate the long history of trade relations between Canada and Manchester, in recognition of the importance of the Manchester Ship Canal to that history, then CEO of Manchester Liners (subsequently Furness Withy) Robert Stoker commissioned an artwork to be set in front of HQ, Furness House, just a stone’s throw from the water in Salford quays. That commission was given to Doug Cranmer, a celebrated ‘Namgis carver, trainee to the renowned Mungo Martin, whose 100-foot pole stands in Windsor Great Park.

During a year in which he carved some 30 poles, Doug completed the pole that was to be sent to Salford—a 32-foot pole replete with crests and figures of significance to the ‘Namgis. It was delivered to Dock 9 in the summer of 1969, unloaded and unpacked by Barry Willetts, foreman over the building of Furness House, site manager Albert Brierly and others, and, with little ceremony and lots of finagling, installed in front of Furness House where it stood for around 36 years.

In 2005, fearing rot at the base would make it unsafe, the pole was taken down—literally chainsawed off at ground level—and taken into storage.

In the past two years, after several thwarted attempts to site the pole, Councillor Stephen Coen has been working with researchers at the University of Kent and the University of East Anglia (see the “Beyond the Spectacle” team’s website) to understand the significance of the pole both to the people of Salford and the ‘Namgis community itself. In 2018, Salford City Council, the Beyond the Spectacle team, and Fortis Construction, who are extensively redeveloping the area around Furness House in a multimillion-pound project, signed a memorandum of understanding that, through Fortis’s generous sponsorship, will see the pole fully restored and reinstalled in the grounds of the refurbished Furness House (read more about each group’s involvement on our People page). The restoration work, being undertaken by Doug’s nephews Kevin Cranmer and Edgar Cranmer, and one of Doug’s apprentices, Bruce Alfred, began in 2010 and will continue through to the pole’s rededication some time in 2022 (see more about their visits on our timeline).

Please explore this website and feel free to contact us with any questions or—more particularly—any stories you may have about the pole.

This web resource has been compiled by the ‘Beyond the Spectacle’ project.

Do you have any memories, stories, or photographs of the pole either when it was originally in situ or more recently? If so, we would love to hear/see them and learn what the pole means to you. Contact us at beyondthespectacle@kent.ac.uk