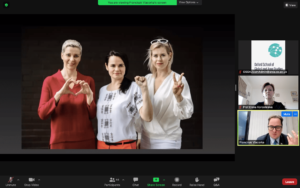 On 21 October 2021, Prof. Chris Gerry, PI and Head of OSGA, and Prof. Elena Korosteleva COI, launched a series of Oxford Belarus Observatory (OBO) webinars on Belarus, the first of a number of OBO initiatives.

OBO-OST-COMPASS Webinar on 3rd February 2022:  Sanctions for, and Counter-sanctions by, Belarus: what is a game-changer? 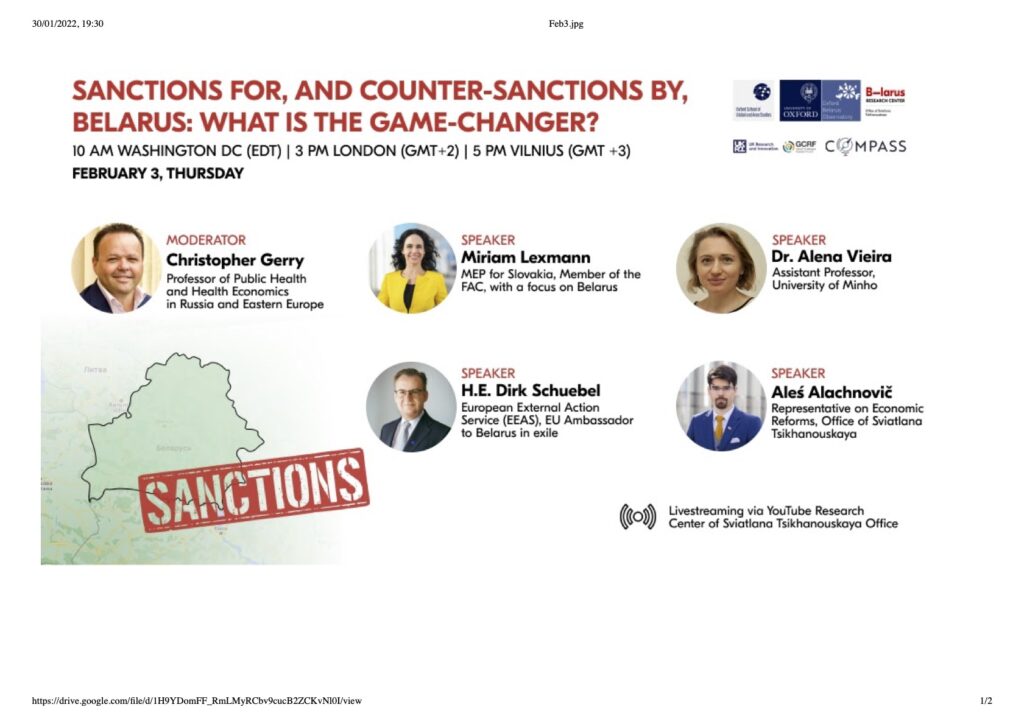 OBO-OST-COMPASS webinar ‘Belarus’s Integration with Russia: assessing the challenges for the country’, 27 January 2022 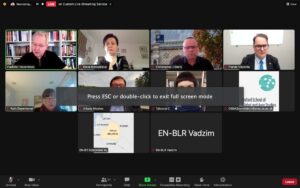 Under the aegis of the Oxford Belarus Observatory (OBO) OSGA, conjointly with the Research Centre of the Office of Sviatlana Tsikhanouskaya (OST), and the GCRF COMPASS project, the second online webinar took place on 27 January 2022, focusing on the nature, reasons and implications of the ever-closer Union State between Russia and Belarus for the latter and the wider region, especially now, at the times of hyped security across the region in relation to Russia’s looming war with Ukraine. The speakers included Franak Viačorka, Senior Advisor to Sviatlana Tsikhanouskaya, Head of the Foreign Policy Department; Prof. Vladislav Inozemtsev, Founder, Centre for Post-Industrial Studies and Professor, MSU and HSE; Dr Arkady Moshes, Programme Director for the EU Eastern Neighborhood and Russia research programme, FIIA; and Dr Ruth Deyermond, Senior Lecturer, Department of War Studies, King’s College London, moderated by Prof. Elena Korosteleva.  The discussion highlighted the current tensions and the increasing politico-military nature of the Union State, which raises concerns for Belarus as a country, which prided itself on its neutrality status to date. The link to the discussion is available here.   Please join these weekly webinars on Thursdays at 15.00 UK time, by registering here.

OBO-OST-COMPASS webinar ‘Protests in Kazakhstan and the CSTO involvement: security implications for Belarus and the wider region’, 20 January 2022 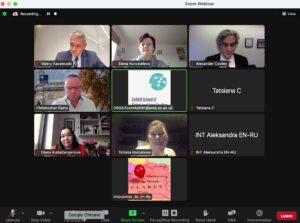 Under the aegis of the Oxford Belarus Observatory (OBO) OSGA, and the Office of Sviatlana Tsikhanouskaya (OST), with the support of the GCRF COMPASS project, the first online workshop this term took place on 20 January 2022, focusing on the implications of the protests and the deployment of CSTO forces in Kazakhstan, for Belarus and the wider region. The speakers included Dr Diana Kudaibergenova, Lecturer in Sociology, University of Cambridge; Valery Kavaleuski, Head of the OST Cabinet in charge of Foreign Affairs; Prof. Tatiana Romanova, St Petersburg State University & HSE, Russia; and Prof. alexander Cooley, Director of the Harriman Institute, Columbia University N.Y.; moderated by Prof. Chris Gerry, Head of OSGA and PI for OBO, University of Oxford. The focus of discussion was on drawing parallels between the nature of protests in Belarus (2020-21) and Kazakhstan (2022) highlighting their self-organisation and self-reliance; and on the implications of deploying CSTO forces for Belarus especially, which territory now stations its forces for training exercise. The link to the discussion is available here .   Please join these weekly webinars on Thursdays at 15.00 UK time, by registering here. 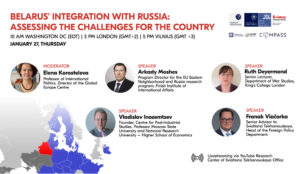 On the state-run “Day of National Unity” September 17,  Vladimir Putin and Aliaksandar Lukashenka held the Supreme State Council of the Union State via video conference. A decree of the Union State was signed, which approved 28 out of 31 integration programmes, including the Concept of Migration Policy. The documents are aimed at developing and deepening integration between the two states in the economy, politics, and military spheres. The Military Doctrine too has received an important revision: according to the representatives of the official Minsk and Moscow, it “is (now) conditioned by changes in the military-political situation in the region, the emergence of new security challenges and threats for Russia and Belarus.” Meanwhile, Mr Lukashenka acknowledged Crimea as part of Russia de facto, and declared his support in the case of Ukrainian aggression.

How should we understand these developments? What are the meaning and security consequences of further integration between Belarus and Russia? Can signing the Military Doctrine be interpreted as a potential threat for regional security? These and other questions will be discussed at the expert webinar jointly convened by the Research Centre of Sviatlana Tsikhanouskaya’s Office (OST Research Centre) and the University of Oxford’s Belarus Observatory (OBO), with the support of the GCRF COMPASS project.

Please join us on Thursday, 27 January 2022, at 15.00 UK time, by registering here: https://zoom.us/webinar/register/WN_0giC7P_BS7KynPvZyRgHNA

‘Complexity, resilience and the political: understanding the many crises in Belarus’:  Prof. Elena Korosteleva to deliver keynote address at the 7th Annual Conference on Belarusian Studies, 18-19 February 2022 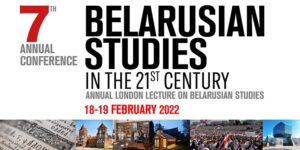 Moderators: Chris Gerry & Elena Korosteleva
The recent (and still ongoing) protests in Kazakhstan took many by surprise. For a resource-rich country, a sharp rise in energy prices and ensuing consumer impoverishment, which contributed to the protests, have raised questions, but in truth these developments have been anticipated for years. What was truly out of the ordinary is the subsequent rapid rejigging of power configurations, and the deployment of the Collective Security Treaty Organisation (CSTO) troops to restore order. The former looked like a premeditated coup, and the latter were invited by Kazakhstan authorities, raising some serious security concerns among politicians, the military, experts and ordinary citizens. While for the international community these developments in Kazakhstan seem like another exercise of power by Russia; for Belarus this was the first deployment of its troops abroad, on a CSTO mission.
What are the implications of the protests in Kazakhstan for the post-Soviet region and Belarus in particular? What do they mean also for regional and international security, in the current circumstances? What recommendations should be offered to the national and international stakeholders, regarding the CSTO’s military involvement, to restore order? These and other questions will be discussed at the expert webinar jointly convened by the Research Centre ofSviatlana Tsikhanouskaya Office(OST Research Centre) and theOxford Belarus Observatory(OBO), with the support of theGCRF COMPASS project.
Please join us on Thursday, 20 January 2022, at 15.00 UK time, by registering here:Link for zoom registration:https://zoom.us/webinar/register/WN_hEaLkSr9RH6V-kIhKi6wyw 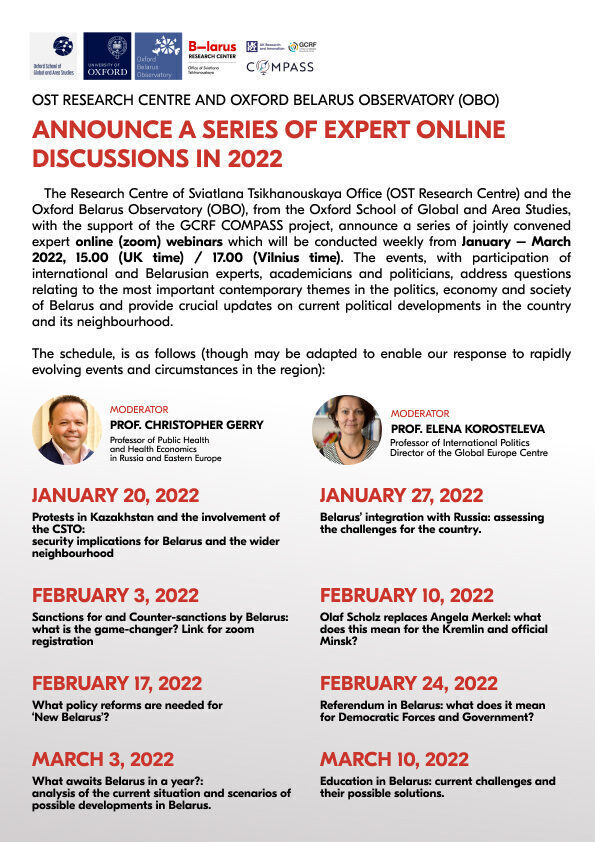 @GCRF COMPASS and @OxfordBelarus Observatoryorganised a book workshop for the forthcoming new book on Changing Belarus in the XXI Century: between dictatorship and democracy (Routledge). The workshop involved contributors presenting their draft chapters to receive further feedback from the editors and fellow authors. The book is structured in three parts focusing on I) History, identity and politics; II) Socio-economic and institutional landscape; and III) Reclaiming public space and fostering peoplehood, with both established and young scholars, and the foreword from Svetlana Tsikhanouskaya. It is anticipated that the book will be produced by the end of 2022. 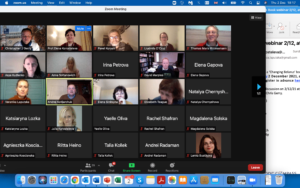 On 2 December, as part of the GCRF COMPASS-OBO initiative, Professor Korosteleva, together with her co-editors Dr Irina Petrova and Asya Kudlenko, organised a group discussion of their forthcoming book ‘Changing Belarus in the XXI century’. The discussion was chaired by Professor Chris Gerry (also a contributor to the book), and was structured along the following three parts: Part I – History; Part II – Current Landscape (Economy; the Judiciary and Constitutional Change) and Part III – Civil Society, Identity and the Future. Book contributors were invited to briefly outline their ideas, which was followed by Q&A. 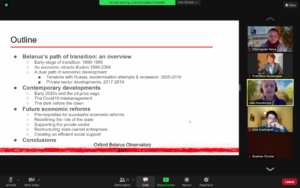 On 18 November 2021 a third GCRF COMPASS-Oxford Belarus Observatory (OBO) webinar took place online, convened by Professor Christopher Gerry (OSGA) and Professor Elena Korosteleva. It was titled ‘Stolen decades: the unfulfilled expectations of the Belarusian economic miracle’ and delivered byProfessor Julia Korosteleva (UCL SSEES) and Ales Alakhnovich (economic advisor to Svetlana Tikhanovskaya). They examined thirty years of Belarus’s economy arguing that the so called ‘Belarusian miracle’ had finally exhausted itself, revealing Belarus’ deep and unhealthy dependency on Russia, and a desperate need for reform required for a failing economic state. The paper is part of the forthcoming book ‘Changing Belarus in the 21 century’ commissioned by Routledge. 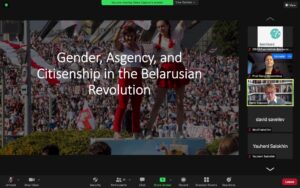 On 4 November GCRF COMPASS-OBO conducted their second international webinar on ‘Agency, Gender and Citizenship in Belarusian Protests’. The talk was delivered by Professor Elena Gapova from Western Michigan University. The discussion focused on the nature of recent Belarusian protests, including their explicit gendered dimension, and explanations for the unprecedented mobilisation of women in Belarus. The webinar attracted over 50 participants from across Europe, including academics, students, FCDO officials and practitioners.

21 October:  The OBO launch event was opened with a talk by Franak Viachorka, Senior Advisor to Sviatlana Tsikhanouskaya, and non-residential Fellow at the Atlantic Council’s Eurasia Centre. 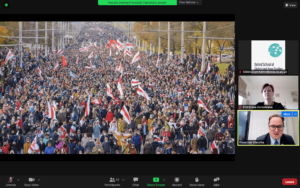 Franak’s talk was titled ‘KGB vs Youtubers. How technology and self-organisation became the driving force of Belarus’ peaceful revolution’, followed by nearly two hours of Q&A. The link to the event can be found here . 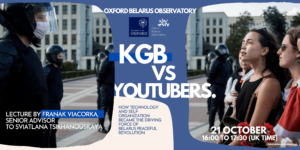