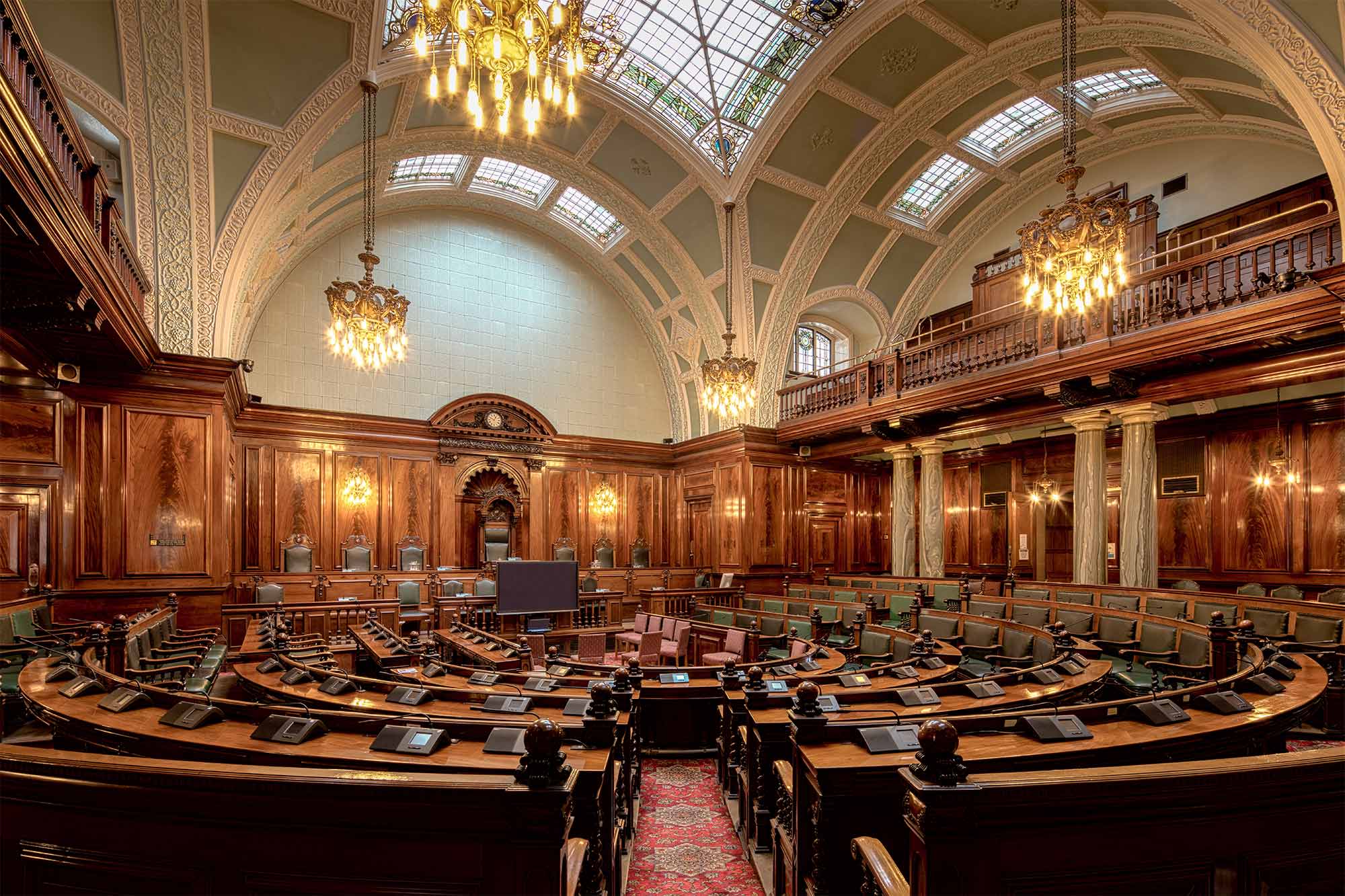 The Centre of Federal Studies aims to conduct cutting-edge social science research, offer consultancy to public and private organisations, and provide expert commentaries for international media. Key areas of expertise include public opinion surveys, constitutional design including the study of formal and informal institutions and citizen engagement in federal projects. Members of the Centre have specifically worked on federal issues in Bosnia, Iraq, Ukraine, Cyprus, Syria, Germany, Australia, Canada, Switzerland and the United Kingdom. Below are same indicative examples of the Centre’s past and current research as well as impact engagement.

‘The Revival of Federalism: Post-Cold War and Post Arab Spring Challenges and Prospects”

“What would a proper federal design look like? Providing they can be agreed upon by genuinely representative elites, the most stable federations are those with more federal units rather than a few. Fifty (the United States) is much better than two (the old Czechoslovakia). It would not be good, in other words, if the Ukrainians agreed, or felt bound, to divide their state into west (the pro-EU part) and east (the more Russophile part, and base of former President Yanukovych’s Regions Party). Every divisive issue would then pit these two parts against each other, and break-up would be only a matter of time. Multi-federal regions, by contrast, would allow floating alliances, which would not always pitch Russophiles against Europhiles; furthermore, they would also create paradoxically useful feasibility and coordination problems that would stand in the way of secessionist tendencies.”

20 years later, this is what Bosnians think about the Dayton Peace Accords by Morgan Jones et al. argues that “the guarantees offered by ethnic federalism might be a necessary precondition for getting minorities to endorse peace settlements. Contrary to many experts, Bosnia suggests that support for these compromises can emerge no matter how opposed are the original players.”

Co-organized with the University of Kent, the workshop focused on alternative visions for the future of the Eastern Mediterranean. It included talks by leading political figures such as former Greek PM George Papandreou and proposals for confidence-building measures put forward by members of the Cyprus Academic Dialogue  a bi-communal civil society group that exists and works for the achievement of a Federal United Cyprus. See also commentary on the event by Richard Moore, Foreign and Commonwealth Director here.

Frontline Ukraine: Crisis in the Borderlands

Kurdish National Council:  “supported by Prof. Dr. Michael D. Burgess and Dr. Neophytos Loizides, both federalism experts from the University of Kent (Great Britain), the KNC leadership adopted a paper arguing why a decentralised, federal system with strong local structures is an essential corner stone for a just, democratic and united Syria.”

The Friedrich-Ebert-Stiftung, the Forum of Federations (Ottawa), Diadraseis Radio Program, the Centre for Federal Studies (University of Kent), and Simfiliosis held a series of events in Nicosia aiming to explore the meaning of a federation in case of a Cyprus settlement (see program here). The events were held at the Home for Cooperation and included Mr George Bizos-the advocate of Nelson Mandela as speaker.

The Federal Trust talks to Dr Adrian Pabst, Senior Lecturer in Politics at the University of Kent, at the conference “Britain and Europe: Difficult Questions”, organised by the Federal Trust together with the Global Policy Institute (GPI) and Industry Forum. The conference took place on the 25th of February 2016 at One Birdcage Walk in London. For full interview click here

The Centre for Federal Studies (University of Kent), the James Madison Charitable Trust, the Forum of Federations and the Federal Trust Fund co-organised a conference ‘Devolution in England: International Perspectives, Politics and Policy Ideas after Brexit,’ on the 20-21 June 2017 at the University of Kent. Around 40 participants, politicians, senior academics, policy makers and NGO representatives from the United Kingdom, Belgium, Germany, Switzerland, Canada, Spain and Italy, attended the conference. The conference aimed to shed the light on the on-going debate over devolution in the UK and more specifically the implication that Brexit will have on the future of institutional design within the UK. The conference was organised in seven sessions that looked on lessons from across the countries such as Germany, Belgium, Switzerland, Spain and Canada in order to provide policy ideas and recommendations. A summary of the core findings and recommendations is published by Dr Nina Sajic here.

Professor Richard Whitman publishes report with Chatnam House. He argues that “Brexit will have significant political and institutional implications for the external affairs of the devolved administrations of Scotland, Wales and Northern Ireland.” see full report here.

Dr Farah Shakir (former PhD student and CFS fellow) publishes a new book. The Iraqi Federation explores why and how Iraq became a federal state, and analyses how the process of formation impacts on the operation of the Iraqi federal system.

Professor Loizides was interviewed on a proposal for  dencentralized federation in Cyprus . For its  adoption in the peace talks see here [CYBC evening news (in Greek)].

Johanna Schnabel interviewed on the differences between the USA and Germany with regard to fiscal federalism.

Managing Interdependencies in Federal States: Intergovernmental Councils and the Making of Public Policy

Dr Schnabel’s new book published here.  The book argues that intergovernmental councils enhance federal stability by incentivizing governments to coordinate, which makes them a federal safeguard. By comparing reforms of fiscal and education policy in Australia, Canada, Germany, and Switzerland, Dr Schnabel shows that councils’ effectiveness as one of federalism’s safeguards depends on their institutional design and the interplay with other political institutions and mechanism

The event included presentation on new survey data on federal attitudes in Cyprus led by the University of Kent through a US Institute of Peace Grant.

PhD candidate Chris Bennett’s new book cited by the NYT here “This is the real consequence of the Dayton model,” said Christopher Bennett, a former international official in Bosnia and author of the book “Bosnia’s Paralyzed Peace.” He added: “It simply does not work. It stopped a war but did not create conditions to make a life.”

“A recent study from the universities of Cyprus and Kent, directed by professors Charis Psaltis and Neophytos Loizides, concluded that the only state structure that would be acceptable to the Greek Cypriot community (to the extent of 76.2 per cent) and the Turkish Cypriot community (71.2 per cent) is the federal structure, which is supported by the international community and in particular by the UN and the EU (a more comprehensive report on the study can be found at: https://ucy.ac.cy/dir/documents/dir/cpsaltis/Options_for_Solution_to_the_Cyprus_issue_2020_ENG.pdf).”

This webinar explored the dynamics and practices of subnational and local governments in responding to the challenges facing Latin America and the Caribbean as a result of the COVID-19 crisis. Presenting perspectives from within the hemisphere and experiences from Europe, speakers discussed key lessons and needs for local governance resilience-building initiatives. On the occasion of the International Day of Peace, the webinar highlighted the unique opportunity that the pandemic offers to refocus priorities and redirect resources towards building more just and peaceful societies. Please see practical guide and online event here

New article by Morgan-Jones et al. published in Democratization on what shapes public support for comprehensive peace agreements. The article develops  and tests a theory of citizen support for peace agreements including  alternative governance structures (i.e. federal, consociational and centripetalist). Click here  for the published version of the article and earlier summary in Monkey Cage (Washington Post).

Book launch of Professor Popelier’s book ‘Dynamic Federalism’ at SPIRRS.  Patricia Popelier is Professor at the University of Antwerp and CFS Senior  Fellow.

Power-Sharing in Europe: Past Practice, Present Cases and Future Directions

Federalism in the Middle East: Past Failures and Prospects

New Forum of Federations Report: Sub-National Constitutions in Federal Systems authored by Michael Burgess and Alan Tarr. The paper funded by the Canadian government draws extensively on the work of Tarr and the late CFS Director Michael Burgess.