In September 1538, at the height of the fallout to Henry VIII’s break from Rome and the establishment of the reformed English church, an interlude written by the playwright John Bale was performed in the parish of St. Stephen’s, Canterbury, before an audience that included Bale’s patron, Thomas Cromwell. Many scholars believe this play was King John, an inflammatory anti-Catholic work which lamented how the Church of Rome had brought England to ruin. Two months later, Henry VIII issued a proclamation identifying Thomas Becket as ‘a rebel and a traitor’ and calling for the removal of images of the medieval saint from all ‘churches, chapels, and other places’. Soon afterwards the shrine of Thomas Becket was destroyed in Canterbury Cathedral.

On the evening of 20th February 2019, Cultures of Performance (led by Rory Loughnane, Sarah Dustagheer and Clare Wright) organised a public research event at St. Stephen’s Church which involved a performance of excerpts from Bale’s play. This was the first time King John had been performed in this community space in over 480 years, and the production, directed by Russell Bender, sought to return the audience of students and community members to the sights and sounds of the early performances of this play. In doing so, we also sought to explore the relationship between site and play in a contemporary context; to see how King John might still resonate with St Stephen’s; how it might affect the way participants experienced the space; and how experiencing the performance in St Stephen’s in the here-and-now might also influence their understanding of the play and its historical contexts.

In addition to the Cultures of Performance team, the project also involved three professional actors (Nigel Barrett, Carl Heap, and Rosie Thomson), two student actors (Anna Hegland and Eleanor Tomlin), one amateur actor from the St. Stephen’s community (Graham Jackson), time-specific musical accompaniment (performed by Stephen Barker), and, crucially, architectural projections produced by Rafaella Siagkri (School of Architecture) in collaboration with Howard Griffin (Architecture) and Emily Guerry (School of History). These projections were used to help visualise the performance space as it might have been in the Reformation period. One of the key complaints of early Reformers was, of course, that through the idolatry of images the Catholic church obfuscated God’s message, which could only be found in scripture. As such, when Catholic churches, such as St. Stephen’s, were repurposed for the reformed faith, attention was given to ridding these spaces of their imagery. One of our key innovations on the project was to project images of wall paintings back onto the walls of the church, and to assess the interplay between image and the content of King John. Although it is extremely unlikely that Bale’s play was performed in St Stephen’s church – more probable is the great hall of Place House, the former residence of the archdeacons of Canterbury Cathedral, long since demolished – our aim was to combine new technology with performance to assess and evaluate how the intersection of place and image might affect dramatic interpretation. 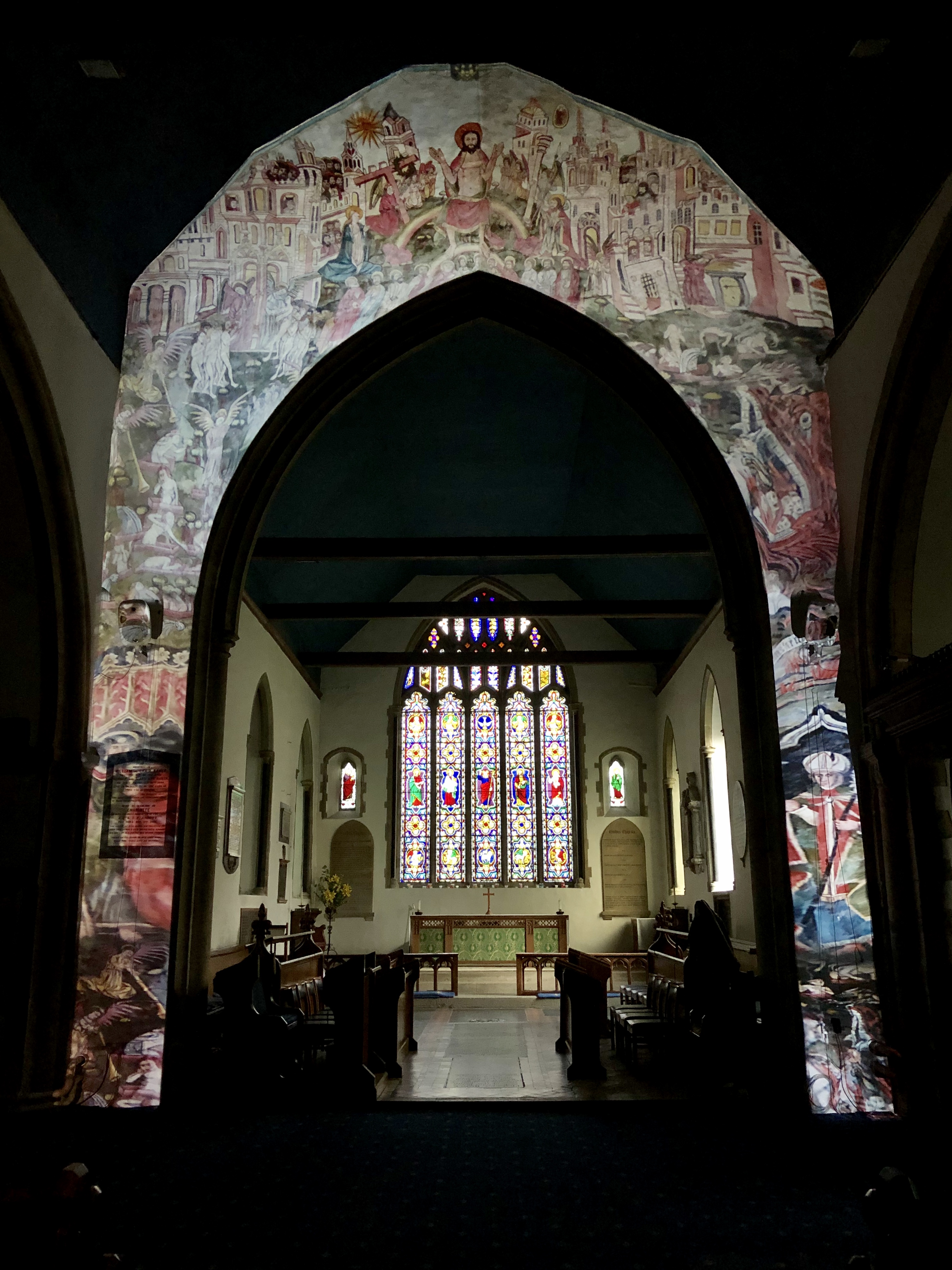 The image projected is the c.1400 Doom from Trinity Church, Coventry. Image courtesy of Rafaella Siagkri

The three images chosen were surviving paintings from English churches: a Doom painting from Trinity Church, Coventry, c. 1400 (seen in the image, above); a Last Judgment from St John’s in Clayton, Sussex, c. 1130; and a Doom from St Thomas and St Edmund, Salisbury [heavily restored], c. 1400. Howard Griffin and Rafella Siagkri used Resolume software to map the projection onto St Stephen’s chancel arch, using four separate projectors to impose the single image onto the white wall. As the audience arrived for the performance, the church was lightly lit with the central ‘stage’ space darkened. As Barrett’s King John and Thompson’s Widow England interacted, the projections were turned on lighting up the chancel arch with the image of the Coventry Doom. The actors, performing three excerpts from King John, made full use of the church space, moving up and down the aisle of the nave, between the north and south transept, emerging from the chancel and passing under the arch. Their movement around and within the space centred, again and again, on the space below the projected images at the crossing, gesturing often to the images above them and the other objects and decorations, modern and antique, present in the church. 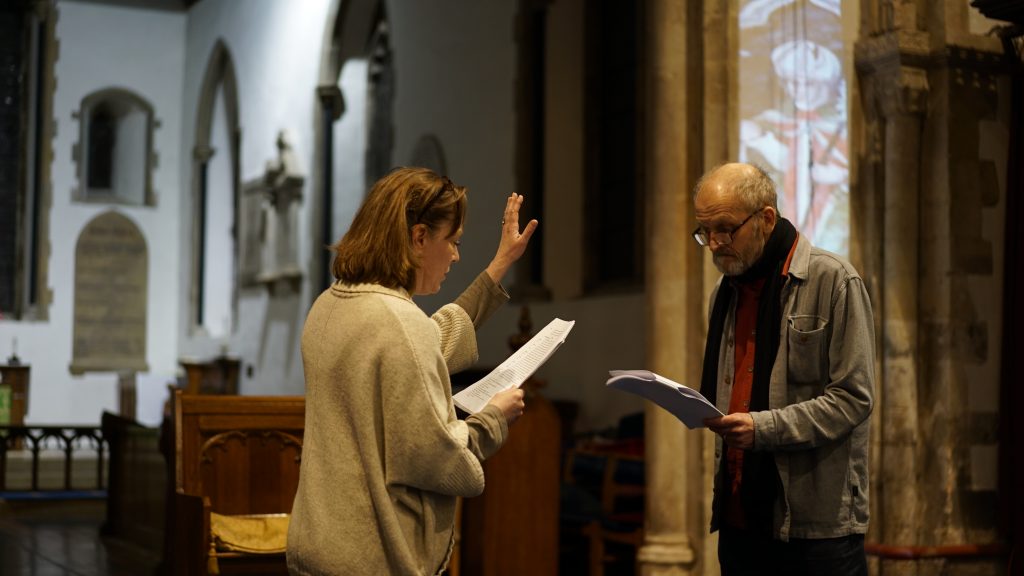 Rosie Thomson as Dissimulation and Carl Heap as Sedition. Image by Tamara Haddad.

Perhaps the most effective moment was extract two, taken from Act 1 in which Sedition meets with his cousin, Dissimulation, a cleric and hustler. Dissimulation reveals to Sedition the means and modes of deception employed by the Catholic Church. These range from their use of Latin in services to their costuming in robes and their illicit practices. He then focuses on the use of images of Saints in churches:

Then have we images of Saint Sprite and Saint Saviour,

Much is the seeking of them to get their favour

The miracles wrought there I can no-wise express. [1]

Thomson’s Dissimulation pointed explicitly at the projected image on the chancel arch, after which there followed the farcical, slapstick entry of Private Wealth (an allegorical figure for the monasteries) and Usurped Power (the pope), all then exiting to re-enter carrying Sedition. 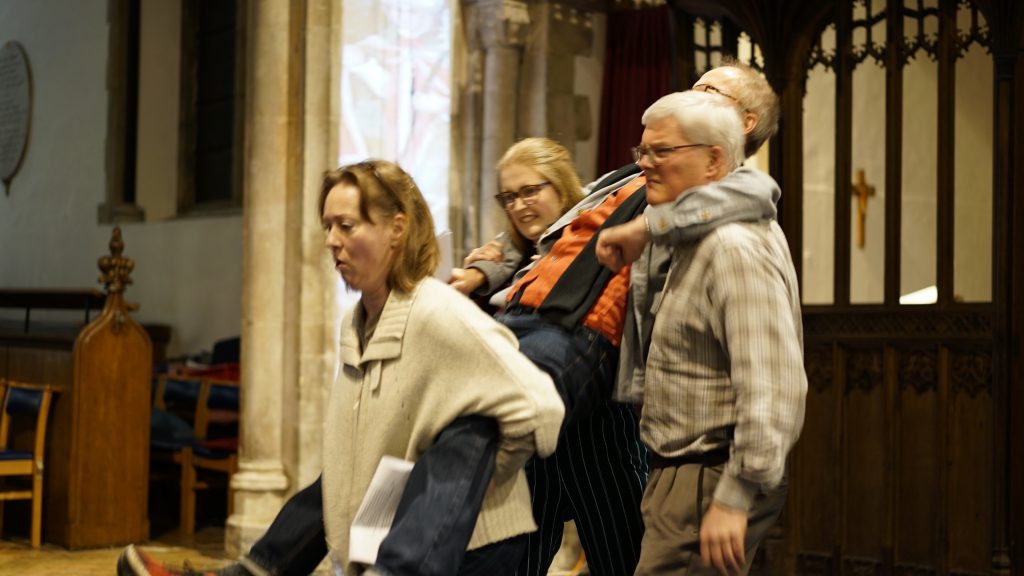 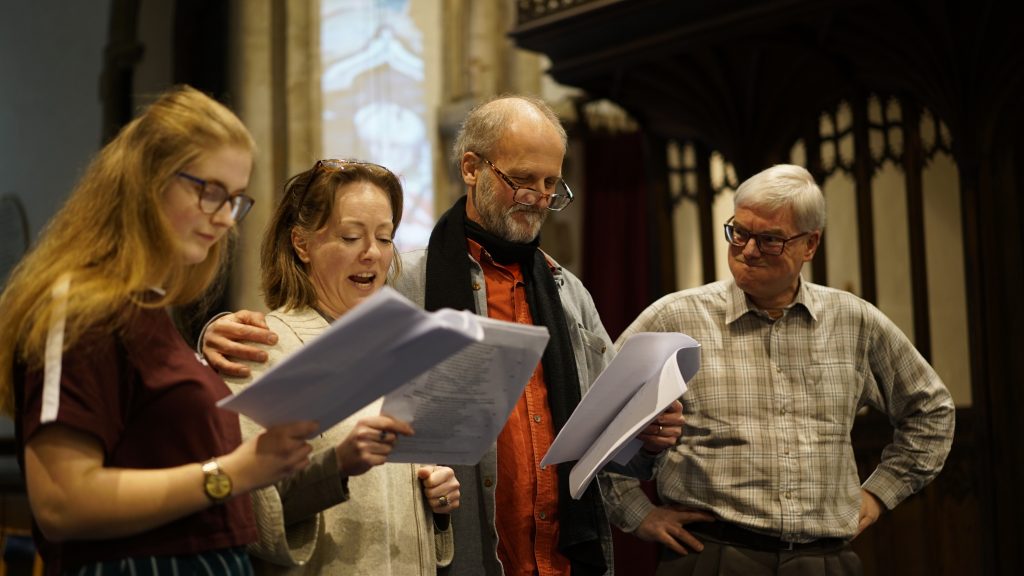 After the performance the audience were asked to complete a short questionnaire about their experience. The responses gave a real insight into the perceived interaction between play and place. Asked about their initial responses to the church, respondents described the space as ‘fairly typical’; ‘slightly plain interior’; ‘just a normal church’; ‘a pretty, ancient space so gently lit in the evening gloom outside’; ‘good space, wide nave, no pillars’; ‘much plainer than other churches’; and, ‘a bit cavernous’. Generally, respondents found the space pretty but empty, and some reflected upon how it was unusual to see so many people in the space when the church is typically ill-attended. Almost all responses to question 2 (What were your responses to the space during and/or after the performance took place?) commented on how the images forced them to reconsider the space: ‘powerful pictures—tradition and propaganda’; ‘loved the way the images worked with the play and how it transformed the architecture’; ‘the transformation was very effective’; ‘the projected images … help to give the idea of the colour of churches in the past’; ‘it changed the look and feel somewhat—unique dimension to the space’; ‘the space became an integral part of the performance’; ‘the projected images were very beautiful and brought the period alive’; ‘utilisation of the full church space was wonderful—the gesticulation to cardinal points [of the church] and images… lovely visual content’; and, perhaps poignantly, ‘can we have the wall paintings back here permanently?’ and ‘projected images enhanced the space—I wish they could stay there’. Another commented that it was ‘sad that we couldn’t have had the same cultural revolution without losing all of the art work’. Those who identified as regular attendees of St Stephen’s included the following feedback to question 3 about how the performance had changed feelings/thoughts/attitudes to the space: ‘it has helped me imagine St. Stephen’s in its historical, but more importantly, theo-political context’; ‘it is very positive to see St. Stephen’s used in this way and attracting a diverse group of people to the performance’; ‘Yes, I feel uplifted and love the way it was full and the historical connection was powerful and meaningful; and ‘I come here fairly regularly and have always found it inspirational – this adds to that value’. For parishioners, the images were, then, evidently both effective, in showcasing the space and bringing to light the historical detail, and affective, in illuminating the historical division that brought about these changes to the space.

Responses to the final question were, however, perhaps the most illuminating. The performance did not gesture towards any contemporary political issue nor did the programme for the event make any connection explicit. Still, the audience generally picked up on certain trans-historical themes: ‘everything remains the same over the centuries’; ‘power is as exciting as it is dangerous in the hands of the few’; ‘fascinating insight into the nature and uses of propaganda of the time’; ‘echoes in today’s society where the “rich” gain riches, money talks, and provides avenues of progression’; and perhaps most strikingly, ‘nothing changes’ and ‘fake news is nothing new’. Nine of the twenty-six respondents drew a parallel with Brexit, often revealing their own feelings on the subject. Comments included: ‘the European Research group of the Tory party is part of a long tradition’; ‘the vehemence of the way in which the political message was put across has echoes of the bitterness of today in the Brexit debate’; ‘I was really disappointed that the king surrendered to a foreign power at the end. I suppose that an audience then might have felt as we feel now—not knowing where current politics might lead’; ‘It brings to mind the issue of leaving Europe and domination from Rome to an independent Britain’; ‘Wow! You could say it was the middle ages ‘Daily Mail’ rationale behind advertisement—fear, greed… Brexit messages could be written in by Bale for now’; ‘The dangers of acquiescing to the apparent safety of a supra-national power, that, in the final analysis, does not care about England and sees it as a cash cow’; ‘this powerfully hateful sectarian propagandist text resonates strongly in these times of deep political and cultural division, with Paisleyites holding sway over government in England’; ‘it’s certainly very anti-Catholic…almost anti-European indeed! So no possible relevance to today!’; and, in a different take, ‘I’m one of the few people who is relaxed about Brexit because versions of it have happened many times before’. Also, interestingly, one respondent highlighted how the anti-Catholic rhetoric might resonate in another way: ‘The corruption of the Catholic Church which is in the news currently … feels quite pertinent. [The Church] doesn’t come out well, even though we know that the play is pure propaganda’.

We aimed in this project to bring together a range of disciplines and practices to think about site and performance, to create collaborative work involving literary scholars, theatre practitioners, architectural designers, historians of art, historians and musicians. In addition, we wanted to involve students and members of the St Stephen’s community in a performance event that would encourage them to re-think and re-imagine a space that might be very familiar to them, as well as consider the ways in which ‘historic’ drama can speak to the here-and-now in the moment of performance. In doing so we hope that we have started a conversation about the benefits of stepping out of subject siloes and engaging in interdisciplinary thinking in order to examine essential issues such as site, space, performance and the intersections between past and present. 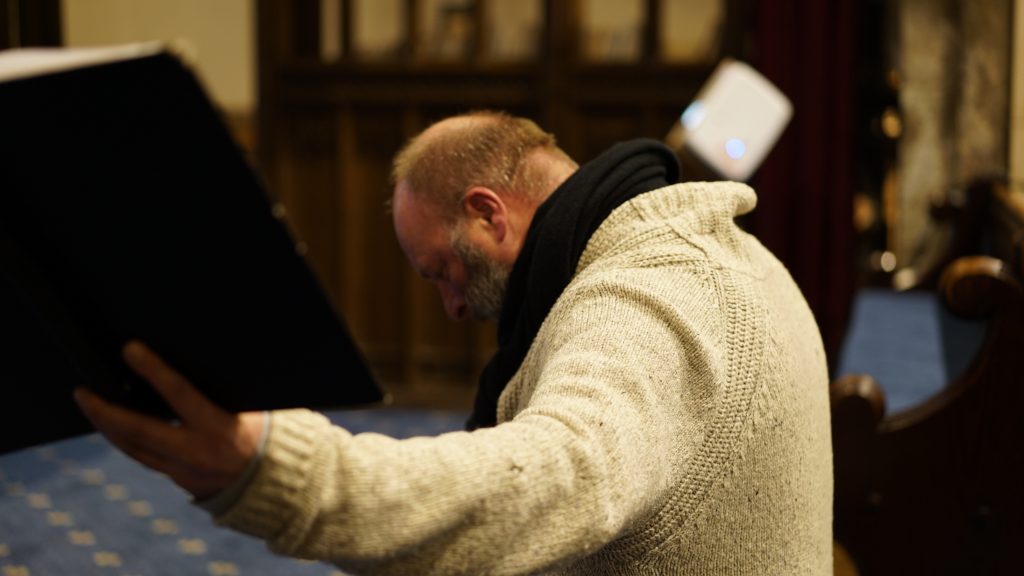 King John (Nigel Barrett) bows to the power of the Catholic Church. Image by Tamara Haddad.