Looking out for Lottie 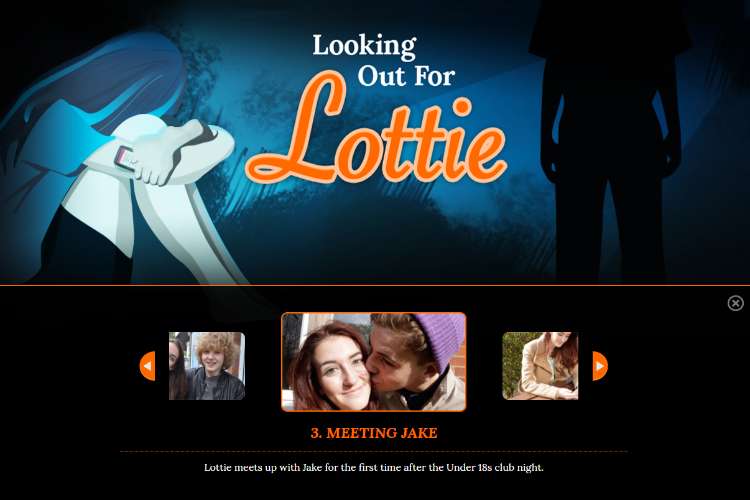 Looking out for Lottie

Looking out for Lottie was launched in 2014. It was developed by the Centre for Child Protection at the University of Kent in partnership with the NHS, as the growing issue of Child Sexual Exploitation (CSE) was identified along with the need to put a robust training package in place.

In 2018, after a yearlong consultation with the NSPCC, the questions contained in the simulation were updated. Also in 2018, Lottie formed part of a five-week ChildLine campaign on healthy and unhealthy relationships. During the campaign, there were one and quarter-million hits on the web page.

Child Sexual Exploitation is a complex and multi-faceted issue which has changing dynamics. Our understanding of Child Sexual Exploitation has developed since the Ofsted report in 2014 ‘It couldn’t happen here, could it?’ This highlighted the fact that CSE was still not understood or tackled appropriately in many areas. However, ‘Time to Listen- a joined-up response to child sexual exploitation and missing children in 2016 (Ofsted, HMIC, CQC & HM Inspectorate of Probation) showed that significant progress in being made in our understanding of and reactions to CSE.  Key themes have now been identified to effectively tackle CSE including agencies working collaboratively using robust processes and procedures.

One of the most well-known methods of victimisation is the localised or ‘street grooming’ method, typified by perpetrators approaching victims in public places, targeting victims via social-networking sites, or in children’s homes (HoC,2013:5; Gohir,2013:68; APPG,2012:12; Jay,2014:31). Localised grooming is characterised by organised groups, generally older men, systematically exploiting vulnerable children and often plying them with alcohol, drugs and presents. Perpetrators persuade would-be victims via grooming that only they ‘care’ about the victim (Jay, 2014:37; Young Person 7, in Griffiths, 2013:17).   Despite the increased understanding of some of the methods used by perpetrators new cases involving street grooming have been discovered and victims have been subjected to extreme calculated abuse. (Spicer 2018).

An often overlooked method which is demonstrated in ‘Looking out for Lottie’ is the ‘boyfriend’ or ‘peer-based’ model, in which through being groomed (face-to-face and/or internet-facilitated), victims view themselves as ‘partners’ of perpetrators, who exploit this perceived relationship, illustrated in the Torbay SCR (Boxall and Wonnacott, 2013:4; HoC,2013:5).   Another common feature of the ‘boyfriend’ or ‘peer-based’ model is involvement in criminal gangs. These gangs often involve an extreme level of threat and violence in order to conduct their multi-million-pound businesses. CSE is also a factor of the criminal operation with 23% of gang associated children disclosing CSE when assessed (Longfield 19). It is problematic that young people may think or be taught that they may be sexually exploited only by older adults, despite 2011 research indicating 27% of known CSE cases were perpetrated by young people (Jago in Berelowitz et al, 2012:23). Even gang-perpetrated CSE comprises more teenagers and young adults than the adult-dominated group, ‘Localised’, model of exploitation (Berelowitz et al, 2012:37). Another important aspect of CSE which is addressed by ‘Looking out for Lottie’ is perpetrator vulnerability factors. In England 27,000 children identified as being in a gang, however, there are also many thousands of children who are being groomed and exploited by gangs who do not identify as being in a gang (Longfield 2019) In understanding the trajectories of young perpetrators, professionals need to understand the social contexts of gang-associated young people and the neighbourhoods within which they frequently develop. These are often impoverished, violent social fields exerting pressure on young people to belong, conform – and comply (Beckett et al., 2013:6).

Proud winners of the Guardian University Award 2016 for Digital Innovation: ‘The award was in recognition of the ‘Lottie’ project, ground-breaking work from the Centre for Child Protection providing an interactive simulation tool to help young people become more aware of the dangers of sexual grooming.’ Guardian University, 2016.

Other useful sources of information