There There, by Tommy Orange 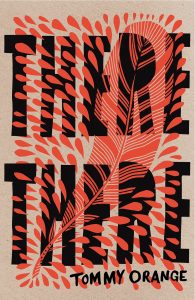 There There is Tommy Orange’s debut novel and it makes for an enjoyable and captivating read. Set in his hometown of Oakland, California, and centred around a powwow, the narrative switches between multiple characters and their personal journeys that lead them to attend the event. The fictional body of the text is preceded by a prologue that describes the non-fictional history of Native Americans’ oppression at the hands of the colonists. Reactions to this unusual prologue differ greatly, some finding it a fantastic means of contextualising the characters’ struggles, and others finding it an ill-fitting (and in places chronologically inaccurate) start that tainted their view of the actual narrative. Full of complexities, the novel occasions many such debates regarding its controversial themes and implications.

One of the most prominent themes in the novel is inevitability. On the one hand, Orange presents inevitability in a sense of interconnectedness: as one of his characters states in the novel, ‘We all came to the Big Oakland Powwow for different reasons. The messy, dangling strands of our lives got pulled into a braid—tied to the back of everything we’d been doing all along to get us here’. This weaving of the narratives is wonderful from a literary and cultural perspective, as is the particular journey of young Orvil. Discouraged from any acknowledgement of his heritage, Orvil takes it upon himself to learn about his culture and teaches himself to dance by watching YouTube videos. The sense that he is intrinsically drawn to his culture suggests that it is inevitable that one will always return to their roots.

On the other hand, the massacre at the Powwow is also infused with this sense of inevitability, posing numerous risks for the perception of Indigenous culture (particularly in urban environments). Indeed, one reviewer wrote that the fictional Powwow was ‘An ersatz attempt at recapturing a bygone era’. This reaction (ignorant and infuriating as it is) seems to be encouraged by Orange’s narrative. By presenting a sense of inevitability regarding the tragedy that befalls the Powwow, Orange appears to suggest that reclamations of culture are ultimately doomed; that Indigenous cultures cannot survive in urban environments, a demonstrably false view but one that persists in contemporary society.

Another problematic element of Orange’s novel is the prominence of alcohol, as all of the characters are affected by, addicted to, and involved with alcohol in some way: Tony suffers from Foetal Alcohol Syndrome, Dene’s uncle died from drinking too much, and so on. He also offers little agency to his characters by presenting their relationships with alcohol as the driving forces of their lives. The “drunk Native” stereotype is a pervasive one throughout contemporary media and Orange’s book attempts to tread a very fine line between those dangerous preconceptions and a gritty portrayal of contemporary challenges.

One of the questions raised in the group was that of context: read in isolation, does the book actually present a truthful and genuine portrayal of urban existence as Orange has experienced it himself? Or is the literary context and the prevalence of stereotypes too strong for the text to be read as an endeavour to humanise the issue of alcoholism and encourage his readers to empathise with them? Moreover, is there a sense of “ticking boxes” to his work: are his characters and their lives tailored to an audience and an industry that favours narratives with “recognisable” (read, stereotyped) Indigenous characters”? Are the characters victims? Or survivors? There are no clear answers to these questions, but perhaps the recently announced sequel will position the novel in a better light and clarify Orange’s intentions, or perhaps the novel’s complexities and controversies are the point.

Holly May Treadwell is a PhD candidate in English Literature at the University of Kent and a member of the Centre for Indigenous and Settler Colonial Studies. Her current research focuses on the representation of Indigenous peoples in American comics.

Next up: Billy-Ray Belcourt’s A History of My Brief Body on December 11th at 11am. If you’d like to join in, please email Holly May Treadwell (h.m.treadwell@kent.ac.uk) or Shelley Saggar (sas86@kent.ac.uk).